Nematodes as a biological indicator

Agricultural soils contain a wide array of small animals and microbes that have many important functions. Some damage root systems and cause disease while others help maintain soil structure, fix nitrogen, store and cycle nutrients, and protect plants from soilborne pathogens. Growers wishing to maintain or improve productivity need to know something about the biological status of their soils. One way of obtaining that information is to collect a soil sample and subject it to nematode community analysis.

The Fact Sheets ‘The Nematode Community in Australian Grain-Growing Soils’ and ‘Nematodes as a Biological Indicator’ explain why the composition of the soil nematode community provides a good indication of a soil’s the biological status (figure 1). However, information on the nematodes present in soil is difficult to obtain because the methods available to extract these animals are laborious, and few people have the expertise required to identify nematodes. Therefore, manual nematode community analysis is not something that can be done on a routine basis.


The PreDicta B DNA tests for nematodes

DNA assays provide a practical and affordable way of determining the composition of the soil nematode community. They have been used for many years to measure populations of plant-parasitic nematodes, but additional tests have recently been developed for free-living nematodes. These tests are available from the South Australian Research and Development Institute (SARDI) through its PreDicta B soil testing service which provides a quantitative assessment of the key pathogens and beneficial organisms in grain-growing soils.

DNA is extracted from a soil sample and measured, and the amount of DNA of all target organisms is presented as picograms of DNA/g soil. Since the pathogenic nematode population densities required to cause crop losses is known, the test is a useful risk management tool to decide whether it is safe to plant a susceptible crop, or whether management options such as tolerant varieties or resistant crops need to be considered.


The benefits of measuring other components of the nematode community

One problem with using pathogen diagnostic tests is that growers lose sight of the fact that many beneficial organisms also occur in soil. The advantage of tests which measure both pathogens and beneficial organisms is that it allows growers to think holistically about their soil biological community and consider adopting practices that will improve the health of their soils, for example:

The free-living nematode component of PreDicta B quantifies nine groups of nematodes:


A healthy soil will have the following characteristics:


Although the above guidelines are useful, it is important to remember that results will be influenced by many factors, particularly soil type and rainfall. The nematode community in a sandy soil in Western Australia will be quite different to a brown earth from the South Australian mid north or a clay soil from the northern grain-growing region. Results of free-living nematode analyses need to be considered at a regional level, and must always be interpreted carefully. One way of doing this is to compare results from farms in similar soil types and environments and use the comparison to determine the management factors that are influencing the nematode community.

Research carried out over many years has shown that agricultural management has major effects on the nematode community. Active, diverse and stable nematode communities are most likely to occur under perennial pastures where rainfall is consistent and plant productivity is high. Soils under no-till cropping for at least 20 years also tend to have a relatively good biological status, particularly if yields have been consistently high and crop residues have been retained.

Crop rotation can affect the microbe-feeding component of the nematode community. For example, residues from legumes have a relatively low carbon to nitrogen ratio and tend to stimulate the bacterial-feeding nematode community. Fungi play a greater role in decomposing grass residues, and so populations of fungal-feeding nematodes will tend to increase when these residues are returned to soil (figure 2). 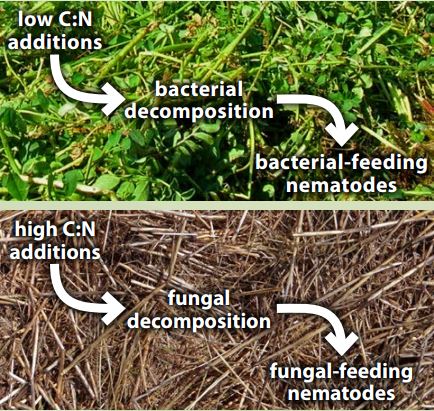 
The practice most likely to have a negative impact on the nematode community is tillage. Tillage is detrimental for two reasons: i) it increases losses of organic matter, the energy source that sustains the bacteria and fungi on which many nematodes depend; and ii) it kills many of the large omnivorous and predatory nematodes, and because they have long life cycles, they take a long time to return.

Fertilisation practices also have a negative impact on some soil nematodes. If high yielding crops are to be produced and adequate quantities of organic matter returned to the soil, nutrition must be adequate. However, it is important that fertilisers are not used excessively, as high nitrogen inputs are known to be detrimental to omnivorous and predatory nematodes.