Historically, stubble has been burnt in southern and central New South Wales because it creates easier passage for seeding equipment, enhances seedling establishment of crops, and improves control of some soil-borne diseases and herbicide resistant weeds. However, the practice of burning stubble has recently declined due to concerns about soil erosion, loss of soil organic matter and air pollution. However, stubble is increasingly being retained which has several advantages of soil fertility and productivity (figures 1 & 2). 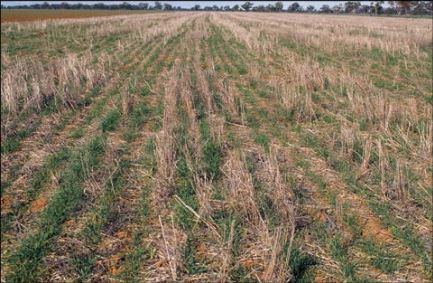 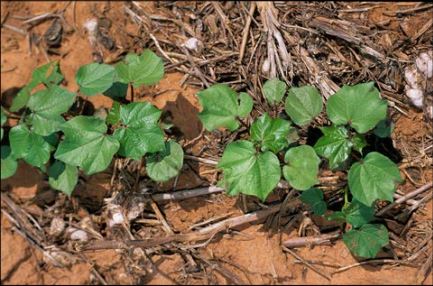 
Summer rainfall and warmer conditions promote decomposition of stubble. In northern NSW over half of the original cereal stubble may be decomposed by winter sowing time, compared to southern NSW where much more of the residue remains in place.

One of the main benefits of stubble retention is reduced soil erosion. Retaining stubble decreases erosion by lowering wind speed at the soil surface and decreasing runoff. At least 50% or more ground cover is required to reduce erosion. It is generally considered that 50% ground cover is achieved by 1 t/ha of cereal stubble, 2 t/ha of lupin stubble and 3 t/ha of canola stubble. A study at Wagga Wagga, NSW demonstrated that stubble retention reduced soil losses by almost two thirds compared to burnt paddocks. It also increased infiltration of rainfall.

A major advantage of retaining stubble is that it increases soil water content by decreasing runoff and increasing infiltration (figure 3). The actual benefits depend on the timing and intensity of rainfall as well as the quantity and orientation of stubble. Late summer – early autumn rains have more chance of improving the germination and establishment of the next crop. In addition, increased infiltration of water over summer can result in greater nitrogen mineralisation and availability for the subsequent crop.

Retaining stubble increases the input of carbon to soil. Stubble is approximately 45% carbon by weight and represents a significant input of carbon to soil. It can take decades for retaining stubble to increase the amount of soil organic carbon. After 10 years, stubble retention generated 2 t/ha more soil organic carbon than stubble burnt plots to a depth of 10 cm in a red chromosol during cropping trials with ley pasture rotations at Wagga Wagga (Scott et al., 2010). After 25 years the inclusion of a clover pasture in the rotation in the same trial had a greater effect on soil organic carbon increases even with tillage compared to stubble retention (Chan et al., 2011). Retaining stubble may only increase soil carbon where it is coupled with cultivation but not with direct drilling.

The carbon to nitrogen ratio (C:N) of residues is an important factor in determining the contribution they will make to carbon sequestration as it governs how quickly residues decompose. Pulse residues (C:N 20:1 to 41:1) are more decomposable than wheat residues (C:N 45:1 to 178:1). Faster decomposition may improve nutrient availability for the following crop, but reduce the sequestration of carbon from residues into soil.


Other benefits of stubble retention

Retaining stubbles returns nutrients to the soil, the amounts depend on the quality and quantity of stubble. Wheaten stubble from a high yielding crop may return up to 25 kg of available nitrogen per hectare to the soil. The addition of organic matter with retained stubbles supports soil life, and can improve soil structure, infiltration and water holding capacity. These benefits are greater when integrated no till practices.

Fungal diseases can be carried from one crop to the next in several ways. It is important to consider the life cycle requirements of any pathogen in order to control it effectively. Some fungal diseases are harboured in stubbles (e.g. crown rot), while others are predominantly present in root residues in the soil (e.g. Take all). Burning stubble is often of limited benefit because it does not affect pathogens beneath the soil surface. Effective weed management of other host species may be more important, or rotations with non-host plants.

However yield losses from Brown leaf spot and cucumber mosaic virus in lupins have been reduced by retention of stubble.