Boron (B) is essential for crop growth and development but in very small quantities. While the precise role of boron in plants is not fully known there is evidence to show that boron is important for cell division, the production of nucleic acids (DNA, RNA), the movement of sugars across membranes and the development of reproductive structures (i.e. pollen tubes, fruit, grain).

For most crops, 1 – 4 mg-B/kg soil is sufficient to prevent nutrient deficiencies. Less than 0.5 mg-B/kg is rated as marginal to deficient. Boron is generally present in soils as B4O72-, H2BO3-, HBO32- and BO33-. Each of these ionic forms are readily leached under high rainfall conditions. Acid deep sands in higher rainfall regions (> 600 mm) where there is little clay and organic matter within the root zone are at most risk of having low boron levels. Symptoms of boron deficiency vary between plants ranging from hollow cavities in vegetable crops, distorted growing tips, discoloration and a ‘corky’ appearance in fruit and flower and pod abortion in canola. Symptoms are most noticeable in actively growing sites. A map of potentially boron deficient soils in Western Australia is given in figure 1. 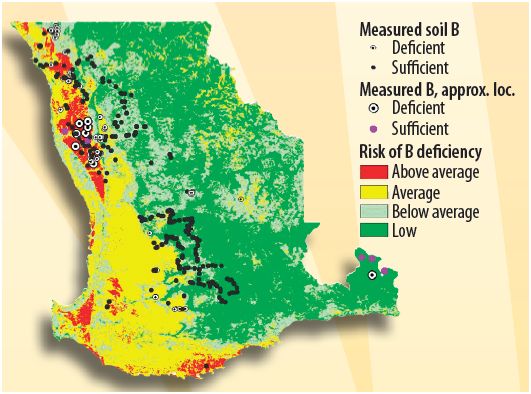 Figure 1: Areas within south-western Australia cropping region believed to be at risk of boron deficiency based on surface geology, topsoil pH and clay content (adapted from Wong et al., 2005).

Boron toxicity in Australia is mainly confined to the low rainfall (< 550 mm/yr) Mallee vegetation communities of Western Australia, South Australia and Victoria. The soils typically contain highly alkaline (pH > 8) and sodic clay subsoils which are poorly leached and have boron concentrations > 12 mg-B/kg of soil. Often boron toxic soils have formed from marine sediments or boron rich minerals including tourmaline. Symptoms of boron toxicity in barley are chlorotic and necrotic lesions in older leaves whereas in wheat there are few visual symptoms. Soils with potentially high levels of boron in WA are shown in figure 2.

Boron toxicity is relatively rare compared to boron deficiency and is hard to treat. Managing boron toxicity can be achieved through leaching, the application of amendments and using tolerant varieties. Irrigating to encourage leaching is highly effective. However in the absence of irrigation water, amending soils with gypsum can increase water infiltration in sodic clays and consequently leach boron deeper into the soil. Dryland trials near Esperance, WA, have shown high rates of gypsum over 20 years can leach boron approximately 10 – 20 cm. In some circumstances foliar sprays of zinc have been shown to alleviate boron toxicity, although the interaction between boron and zinc is poorly defined. 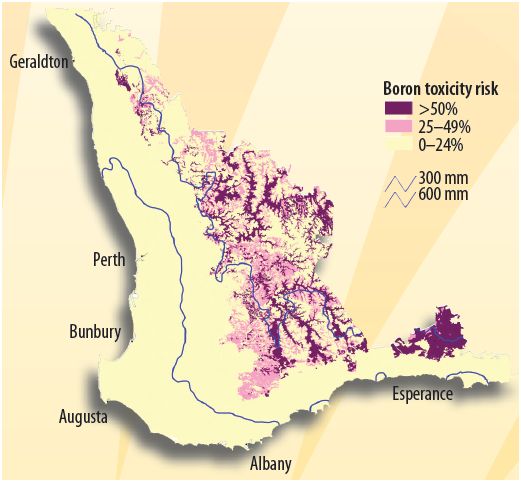 Soil testing is considered the best method for determining the presence of boron deficiency or toxicity. However due to the high spatial variability in soil boron, testing needs to be done strategically in areas of high and low plant production and throughout the root zone. Due to the mobile characteristics of boron in soil, the most accurate determination of boron status is to sample soil to depth. Hot water extraction in 0.01 M CaCl2 solution is the recommended method for determining soil boron.

Plant tissue testing is less reliable as critical limits cannot be easily determined due to the uneven accumulation of boron in plant tissues, variation in boron uptake at different growth stages and the leaching of boron from plant tissue during rainfall. Seed testing is seen as a more reliable method for determining potential boron toxicity. Grain with more than 3 mg-B/kg is likely to have been grown in boron toxic soils.

Plant species and varieties differ in their susceptibility to boron deficiencies and toxicities. Specific species tolerances to boron deficiency are given in table 1. In terms of boron toxic soils there appears to be more variation in tolerance within species than between. The cultivars or genotypes that are most susceptible to boron toxicity accumulate boron where as those least susceptible have the ability to exclude boron.


Table 1: Crops and cultivars susceptible to boron deficiency or toxicity.