The soil bulk density (BD), also known as dry bulk density, is the weight of dry soil (Msolids) divided by the total soil volume (Vsoil). The total soil volume is the combined volume of solids and pores which may contain air (Vair) or water (Vwater), or both (figure 1). The average values of air, water and solid in soil are easily measured and are a useful indication of a soils physical condition.

Soil BD and porosity (the number of pore spaces) reflects the size, shape and arrangement of particles and voids (soil structure). Both BD and porosity (Vpores) give a good indication of the suitability for root growth and soil permeability and are vitally important for the soil-plant-atmosphere system (Cresswell and Hamilton, 2002; McKenzie et al., 2004). It is generally desirable to have soil with a low BD (<1.5 g/cm3) (Hunt and Gilkes, 1992) for optimum movement of air and water through the soil. 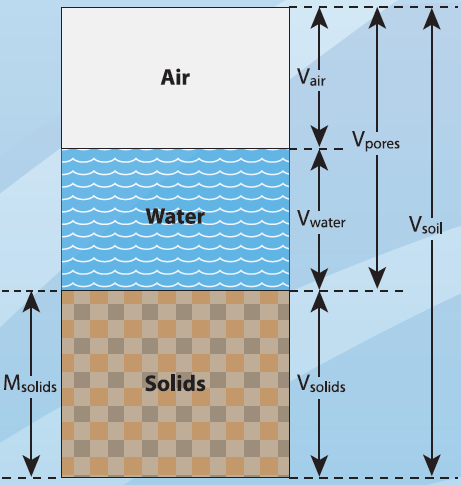 Bulk density measurements can be done if you suspect your soil is compacted or as part of fertiliser or irrigation management plans (see Bulk Density – On Farm Use) factsheet. To account for variability, it is useful to take several measurements at the same location over time and at different depths in the soil, for example at 10, 30 and 50 cm depths to look at both the surface soil and subsoil. It is also useful to measure the bulk density of when comparing management practices (e.g. cultivated vs. non-cultivated) as physical soil properties are often altered (Hunt and Gilkes, 1992).

The most common method of measuring soil BD is by collecting a known volume of soil using a metal ring pressed into the soil (intact core), and determining the weight after drying (McKenzie et al., 2004).

This method works best for moist soils without gravel. If sampling during summer, it is possible to wet the soil manually to keep bulk density core intact. To do this, place bottomless drum on the soil and fill with water, allowing to wet naturally for 24 hours.

Using the appropriate tools (see information box), prepare an undisturbed flat horizontal surface in the soil with a spade at the depth you wish to sample. Push or gently hammer the steel ring into the soil. A block of wood may be used to protect the ring. Avoid pushing the ring in too far or the soil will compact. Excavate around the ring without disturbing or loosening the soil it contains and carefully remove it with the soil intact (figure 2). Remove any excess soil from the outside the ring and cut any plants or roots off at the soil surface with scissors). Pour the soil into the plastic bag and seal the bag, marking the date and location where the sample was taken. Common sources of error when measuring BD are disrupting the soil while sampling, inaccurate trimming and inaccurate measuring of the volume of the ring. Gravel can make trimming the core difficult and give inaccurate values, and it is best to take more samples to decrease error in this way. 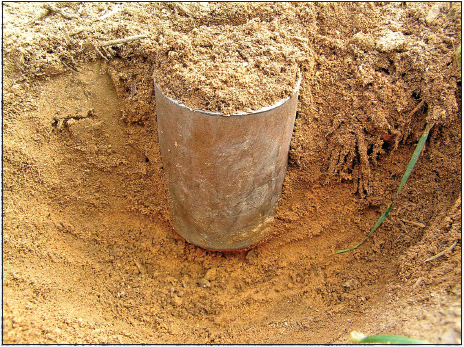 To calculate the volume of the ring:

i. Measure the height of the ring with the ruler in cm to the nearest mm.

ii. Measure the diameter of the ring and halve this value to get the radius®.

To calculate the dry weight of the soil:

i. Weigh an ovenproof container in grams (W1).

ii. Carefully remove the all soil from the bag into the container. Dry the soil for 10 minutes in the microwave, or for 2 hours in a conventional oven at 105ºC.

iii. When the soil is dry weigh the sample on the scales (W2).

The critical value of bulk density for restricting root growth varies with soil type (Hunt and Gilkes, 1992) but in general bulk densities greater than 1.6 g/cm3 tend to restrict root growth (McKenzie et al., 2004). Sandy soils usually have higher bulk densities (1.3–1.7 g/cm3) than fine silts and clays (1.1 – 1.6 g/cm3) because they have larger, but fewer, pore spaces. In clay soils with good soil structure, there is a greater amount of pore space because the particles are very small, and many small pore spaces fit between them. Soils rich in organic matter (e.g. peaty soils) can have densities of less than 0.5 g/cm3.

The fraction of soil that passes through a 2 mm sieve is the fine earth fraction. The material left in the sieve (particles >2 mm) are the coarse fragments and gravel. The presence of gravel has a significant effect on the mechanical and hydraulic properties of soil. Total pore space is reduced in soil with abundant gravel and plants are more susceptible to the effects of drought and waterlogging. If soil has >10 % gravel or the stones are >2 cm conventional bulk density readings will be inaccurate, as most coarse fragments have bulk densities of 2.2–3.0 g/cm3 (McKenzie et al., 2002). This is important to recognise when using bulk density measurements to calculate nutrient levels on an area basis, as an over-estimation will occur.

The excavation or water replacement method is useful for soils that are too loose to collect an intact core or clod, or for soils containing gravel. Both the intact clod and excavation methods are described in detail by Cresswell and Hamilton (2002).

Please refer to Bulk Density—On Farm Use fact sheet for information on interpreting bulk density results and using this in total nutrient and carbon calculation.