Bulk Density – On Farm Use

The soil bulk density (BD), also known as dry bulk density, is the weight of dry soil divided by the total soil volume. The total soil volume is the combined volume of solids and pores which may contain air or water, or both (figure 1). The average values of air, water and solid in soil are easily measured and are a useful indication of a soils physical condition.

Bulk density is most commonly used in agriculture when investigating compaction layers which occur between 10 – 40 cm as a result of machinery and stock impacts. This simple measurement can also be used to determine various nutrient levels and other soil quality indicators on an area basis, by converting weight measurements (e.g. mg/kg) to area measurements (e.g. kg/ha). 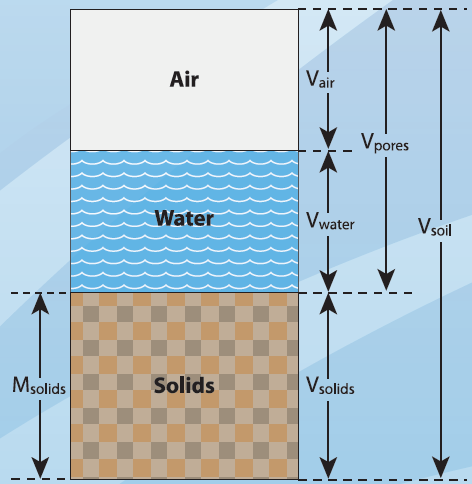 Bulk density is relatively simple to measure and is best done when the soil is wet. Manually pre-wetting the soil will not affect the bulk density. For a full description on the sampling process for bulk density refer to the Bulk Density – Measurement fact sheet.

Soils with low bulk density are generally more suitable for agriculture, since the high pore space has a greater potential to store water and allow roots to grow more readily. Bulk density increases with compaction and tends to increase with depth. Fine textured soils (high in silt and clay) tend to be less dense than sands, particularly if the size distribution of the sands is such that the gaps between larger particles are filled with smaller particles (Marshall and Holmes, 1992). As bulk density increases, resistance to roots increases and the amount of water available to crops decreases (see Subsurface Compaction fact sheet).

Soil test results are most often presented either as a percentage of soil (e.g. % organic carbon) or as a weight per unit of soil (e.g. nitrogen, mg/kg). As bulk density is a measure of soil weight in a given volume, it provides a useful conversion from these units to an area basis unit (e.g. t/ha). The resulting number gives an easily understandable idea of the carbon storage or nutritional status of the soil on an area basis.

Soil analysis values can be converted to a meaningful volume for a paddock. For example: 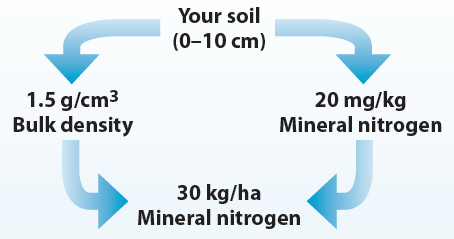 Yes. Gravel tends to complicate soil characterisation and analysis, and needs to be considered on a case by case basis.

For soil analysis purposes, gravel is defined as any particle that is larger than 2 mm in diameter. As these particles are recognised as having little to no effect on the physical, chemical and biological functioning of the soil, they are removed prior to analysis (i.e. % organic carbon and nutrients are typically assessed on a less than 2 mm component). Therefore, if your soil contains a significant amount of gravel, this must be accounted for before multiplying up using bulk density, otherwise you will overestimate quantities on an area basis. Adding the gravel fraction back in after soil analysis will “dilute” certain results per unit area (e.g. total organic carbon, nitrogen and phosphorus).

Tables 1 and 2 give an indication of the multiplication factors when converting soil quality indicators from units in percentage (table 1) and milligrams per kilogram (mg/kg, table 2). After determining the bulk density and approximate gravel content of your soil, you can convert your raw analysis data by multiplying with the appropriate factor in table 1 or 2.