Sustainable management of soil, in particular organic carbon, is essential for the continued viability of Australian agriculture. Increasing the organic carbon retained in soil (also known as sequestration) improves soil quality and can also help to reduce atmospheric carbon dioxide. The Soil Carbon Research Program is working to identify land uses and management practices that growers can use to increase soil organic carbon storage and improve production in a changing climate.

The amount of organic carbon that soil can store varies. This is due to:

For more information see the fact sheet How much organic carbon can soil store?.

Soils on the Esperance sand plain in Western Australia range from deep sands to shallow duplexes. Close to the coast, beef production dominates and some producers use perennial pasture (often kikuyu) to combat the ‘autumn feed gap’. Perennial pastures have longer survival, deeper rooting and greater plant biomass during summer months. As a result, it has been proposed that they may store more soil carbon than annual pastures.

Figure 1: Satellite image of the Esperance sand plain showing the soil carbon sample sites. The sample area was 170 km from east to west and 30 km from north to south. Rainfall in the sampling area was greater than 500 mm.


Did perennial pasture have greater carbon storage than annual pasture?


Table 1: Carbon storage (tonnes per hectare) in the 0 – 30 cm layer of deep sand or shallow duplex soils under either perennial kikuyu pasture or annual pasture.


Carbon is stored in soils as soil organic matter. This means that when carbon is stored, other nutrients (such as N, S, P) are also stored with carbon in the organic matter. For example when you sequester 10 t/ha of carbon this ties up 1 t/ha of nitrogen. Therefore poor nutrient retention may limit attainable carbon storage in coarse textured soils.


Was the attainable carbon storage achieved? 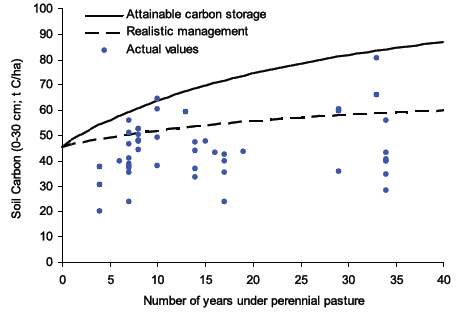 Figure 3: The actual carbon storage at sites on the Esperance sand plain (blue dots) increased the longer kikuyu was grown but was usually lower than the amount the model predicted under realistic management scenario. The attainable carbon storage limit was modelled assuming 100% water use efficiency, 12 month growing period and 100% residue return.

Claying, which is commonly practiced on the Esperance sand plain, is used to overcome water repellence. The aim is to increase the clay content in the surface of the soil to at least 5% – applications of 100 – 300 t/ha clay will be needed. Because clay physically protects organic material from microbial breakdown, claying water repellent sands has been shown to increase carbon storage. Clay amendment has been shown to increase carbon storage by 2 t C/ha over 10 years when the clay content of the topsoil was increased from 1 – 6 % clay. For more information, see the Water repellence fact sheet.


This project is supported by funding from the Australian Government Department of Agriculture, Fisheries and Forestry under its Climate Change Research Program and the Grains Research and Development Corporation (GRDC).