Crown rot is a disease caused by the fungus Fusarium pseudograminearum, and can attack all winter cereals and many grassy weeds. The presence of the pathogen within the plant stem limits water movement, which can result in premature death of the tiller and the presence of white (dead) heads. Crown rot survives from one season to the next on infected stubble, from where it is passed onto the following crop.

The effects of crown rot on yield tend to be most severe when there are good crop conditions in the first part of the season followed by a dry finish. This is because the moist conditions at the beginning of the season enable the fungus to grow from infected stubble to an adjacent seedling, while the dry conditions during flowering and grain filling cause moisture stress, allowing rapid growth of the pathogen within the plant. A wet finish to the season can reduce the damage caused by crown rot, but will not prevent yield loss in all cases.

The infection of plants with crown rot occurs at the base of the plant and spreads up the stem during the growing season. The onset of crown rot is often not obvious until after heading, when whiteheads appear with the onset of water stress (figure 1). Plants infected with crown rot display a number of symptoms, including: 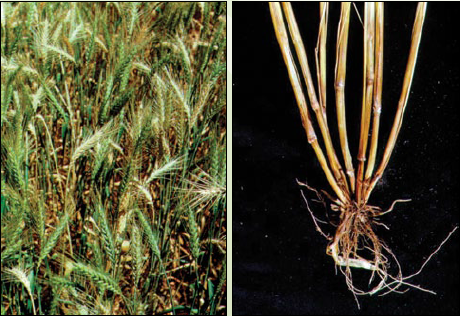 
In addition to visual symptoms, the DNA-based soil test (“PreDicta B™”:) can be used to assess the level of crown rot in the paddock. Soil samples that include plant residues should be tested early in late summer to allow results to be returned before seeding. This test is particularly useful when sowing susceptible wheat varieties, and for assessing the risk after a non-cereal crop. 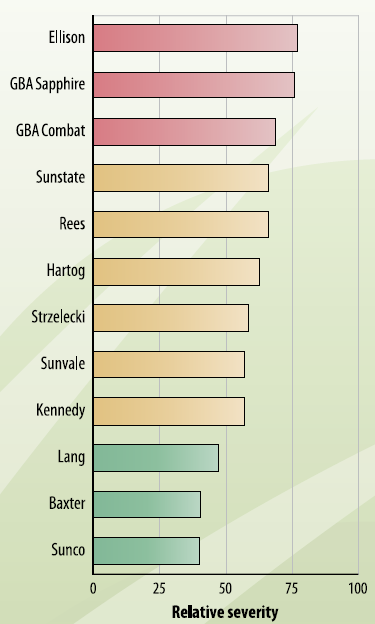 Because crown rot survives from one season to the next on infected stubble, the use of break crops can give stubble a chance to decompose and thus reduce soil inoculum levels. The use of break crops with dense canopies, such as canola and sorghum, can be particularly effective, as these help to maintain a moist soil surface, encouraging the breakdown of cereal residues.

It should be noted that incorporating plant residues into the soil by cultivation during the break period can increase the rate of residue decay. However, cultivation also spreads infected residue, which may increase plant infection rates in following crops – thus counteracting any benefits from increased residue breakdown.

Baling, grazing and/or burning crop residues are also not effective solutions for the removal of crown rot. The majority of the crown rot inoculum is below ground and in the bottom 7 cm of the stem. Thus the crown rot fungus can still survive in below ground tissue even if above ground material is removed.

Stressed plants are most susceptible to the effects of crown rot. Thus the use of management practices to optimise soil water and ensure good crop nutrition can help reduce the impacts of crown rot. Effective strategies can include: