Fact Sheets How Much Carbon Can Soil Store - NSW


HOW MUCH CARBON CAN SOIL STORE? — NEW SOUTH WALES

Recent interest in carbon sequestration has raised questions about how much organic carbon (OC) can be stored in soil. Organic carbon in the soil includes the carbon in the materials related to living organisms or derived from them. In Australian soils, total OC is usually less than 8% of total soil weight and under rainfed farming it is typically 0.7–4%. Increasing the amount of carbon stored in soil may be one option for decreasing the atmospheric concentration of carbon dioxide, a greenhouse gas.

Increasing the amount of OC stored in soil may also improve soil quality as OC enhances many beneficial physical, chemical and biological processes in the soil ecosystem (figure 1) (see Total Organic Carbon fact sheet). When OC in soil is below 1%, soil health may be constrained and yield potential (based on rainfall) may not be achieved. 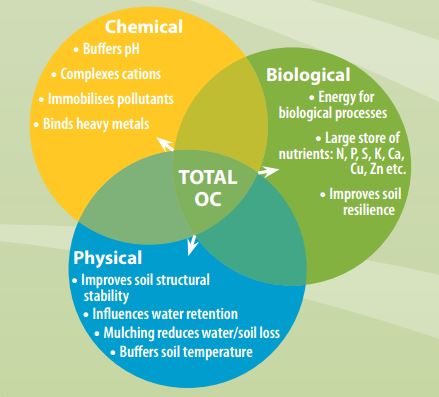 Figure 1: Some of the beneficial physical, chemical and biological processes in soil that total OC contributes to.

The amount of OC stored in soil is the difference between all OC inputs and losses from a soil. The main inputs of carbon to soil in rainfed farming systems are from organic matter in plant material, such as crop residues, plant roots, root exudates and animal manure. Inputs of plant material are generally higher when plant growth is greater.

Losses of carbon via erosion of surface soil can have a large impact on the amount of OC stored in soil. Organic carbon is concentrated in the surface soil layer as small particles that are easily eroded. In some Australian agricultural situations, erosion can cause the annual loss of 0.2 t/ha of soil from a pasture, 8 t/ha from a crop and up to 80 t/ha from bare fallow.

Although not a loss from the soil, removal of OC in plant and animal products prevents carbon entering the soil and adding to soil carbon stores.

Soil type as it relates to clay content has a major influence on the accumulation of carbon in soils (figure 2). Clay particles and aggregates can protect organic matter both physically and chemically. Carbon can be adsorbed onto clay surfaces and organic matter can be coated with clay particles or ‘hidden’ in small pores within aggregates. All of these processes make it difficult for microorganisms to come in contact with organic matter so it is protected from decomposition. Therefore, the amount of OC stored in soil tends to increase with increasing clay content. In contrast, in sandy soil microorganisms are able to more easily access organic matter. This causes greater loss of OC by decomposition. The heavy clay Vertosols of inland New South Wales and red Ferrosols on the southern and northern highlands have the capacity to store greater amounts of carbon than the various lighter red and yellow soils commonly used for wheat growing.

The potential storage of OC in most soil is rarely achieved because climate influences the inputs and losses of OC to soil. 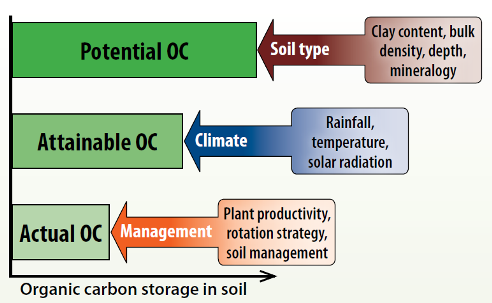 Figure 2: The influence of soil type, climate and management factors on the storage of organic carbon (OC) that can be achieved in a given soil. Based on Ingram and Fernandes (2001).

Climate determines the attainable storage of carbon in soil by influencing plant production and the rate of organic matter decomposition (figure 2). Under dryland agriculture, rainfall is the climatic factor that has most influence on plant productivity and therefore supply of organic matter to soil. In regions with high rainfall, soils tend to have greater attainable storage of OC than the same soil type in a lower rainfall region. Research trials in New South Wales suggest that rainfall limits a soil’s ability to accumulate carbon in minimum tillage systems in the short term if rainfall is <500 mm per annum in southern New South Wales or <700 mm per annum in northern New South Wales. Summer dominant rainfall combined with high temperatures in northern New South Wales promotes greater decomposition of crop residues and returns of carbon dioxide to the atmosphere than in southern New South Wales.


Management determines the actual storage of organic carbon in soil

Management practices determine the actual storage of OC in soil by increasing inputs of organic matter via plant production and decreasing losses (figure 2). Practices that can increase the amount of total OC stored in soil include: