Soil organic carbon in a labile fraction decomposes relatively rapidly (days to years) and is composed of pieces of plant debris, including fresh crop residues and roots that are 0.053–2 mm in size (referred to as particulate organic matter; POM), living organisms and remnants of dead organisms.

Char carbon is referred to as recalcitrant organic carbon that may persist in soil for centuries to millennia.

Labile fractions of soil organic carbon serve as a readily available energy source for soil organisms and so greatly enhance nutrient cycling in the soil. Labile organic carbon is directly linked to improvement in soil quality, and supports the formation of soil aggregates that improve soil structure for better infiltration and water holding.


Labile organic carbon as an indicator 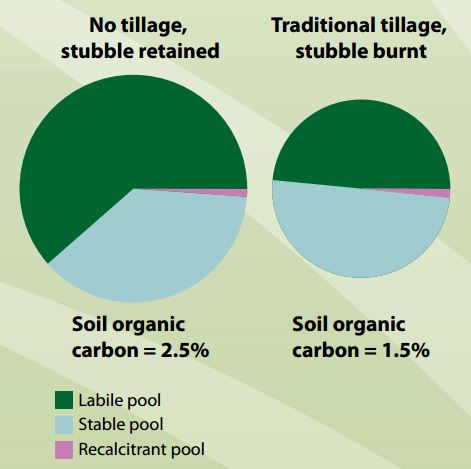 Currently a physical fractionation method that isolates particulate organic carbon (POC) from soil is more commonly used in Australia to monitor changes in labile organic carbon in response to land management. This POC pool has been shown to be more sensitive to increases in organic carbon in soil from pasture phases (Skjemstad et al. 2006) than another widely used method for isolating labile soil organic carbon (potassium permanganate oxidisable carbon).

The POC method estimates the carbon available for decomposition based on particle size of organic matter, while the potassium permanganate method uses a chemical oxidation approach as a proxy for in field decomposition. There are a variety of other methods for measuring labile carbon; each with their strengths.

The C-to-N ratio of a residue decreases as decomposition progresses. Net release of nitrogen occurs when the C-to-N ratio of residues is or falls below 20:1. A labile organic carbon pool containing a high proportion of higher C-to-N ratio residues (>20–25:1) may temporarily induce a net nitrogen immobilisation, decreasing its supply for crop uptake.


- Maximise crop and pasture production by managing constraints to growth, such as compaction, acidity and diseases, and optimising agronomic management such as nutrition.

- Include more pasture phases and include legumes in the mix.

- Retain crop and pasture residues on the paddock.

- Return manure and recycled organic materials to the soil.

- Reduce erosion because it carries off organic matter in the topsoil.

- Avoid overgrazing because it reduces productivity and increases erosion.