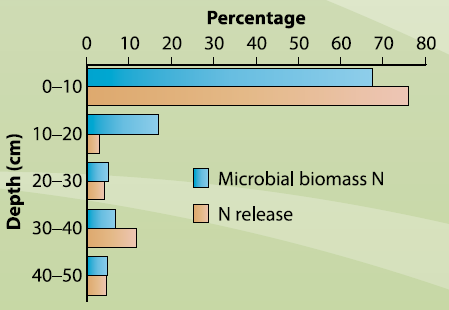 
The activity of the microbial biomass also has a direct impact on soil structure. As bacteria grow they produce polysaccharide gels, which help stick soil aggregates together. Fungi also helps stabilise soil aggregates as the long branching structures they produce, called filamentous hyphae, help entangle soil particles and bind them together.

A diverse and active soil microbial biomass can also be important for the suppression of plant pathogens. Soils that have been intensively cropped for decades have often lost much of their microbial diversity and become susceptible to disease. This is because many of the competitors of fungal pathogens and root-feeding nematodes have disappeared. A soil that has an active and diverse microbial biomass is more likely to have microbes present that can help soils resist disease. For example, some bacteria and fungi produce antibiotics that are detrimental to pathogens, or can inhibit the growth of pathogens by limiting their access to essential nutrients. Certain types of fungi are able to parasitise fungal pathogens, or can even produce structures that ensnare nematodes. 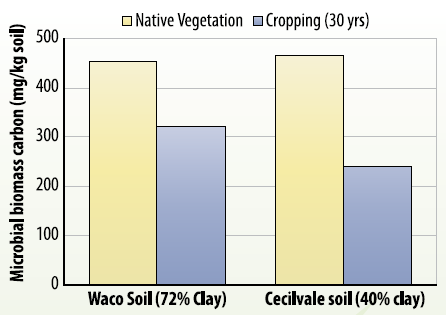 Studies have shown that biological activity in Queensland cropping soils is generally low compared to other land uses, such as pasture or native vegetation, due to the low amount of labile carbon present. Management practices that can increase soil carbon and thus soil microbial biomass include: 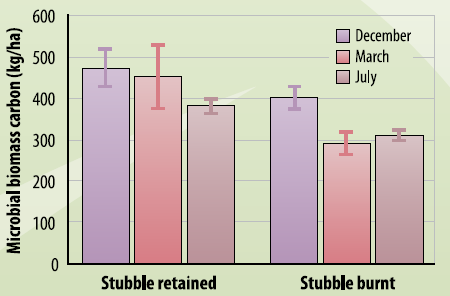