Molybdenum is one of the ‘minor’ nutrients plants require for normal growth. Minor nutrients are only required in very small amounts, as little as 50 g/ha of molybdenum will satisfy the needs of most crops. Molybdenum is present in farmyard manure, in composts and mulches, in some chemical fertilisers and in seeds and other planting material, such as tubers and corms.


Molybdenum tends to be unavailable in acid soils. Molybdenum is present in soil as molybdate, an ion with a negative charge. In acid conditions molybdate bonds with positively charged sites on soil minerals (in a similar way to phosphate), reducing it’s availability to plants.

In NSW molybdenum deficiencies occur mainly on acid soils throughout the coastal areas, on much of the Southern Tablelands, and on parts of the Central Tablelands and Northern Tablelands. Molybdenum responses have been obtained in crops in the

Molybdenum is needed by plants for chemical changes associated with nitrogen nutrition. Without sufficient molybdenum plants accumulate nitrate in their leaves, but cannot use it to make proteins for normal growth.

The plant becomes stunted and the leaves show symptoms of nitrogen deficiency, appearing pale green or yellowish green in colour between the veins (figure 1). The older leaves may be more severely affected with scorched edges.

In cereals, Molybdenum deficient plants appear to be limp (figure 3). 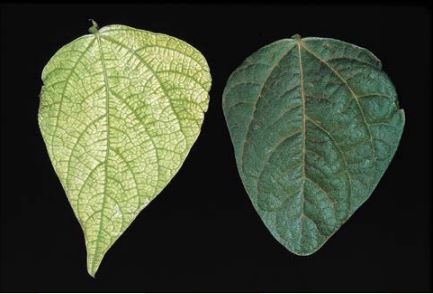 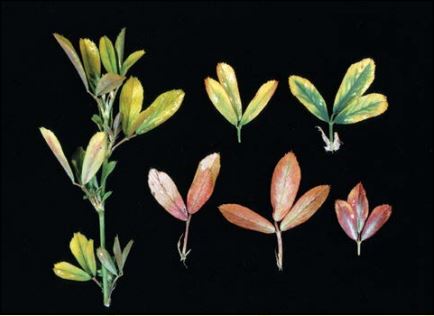 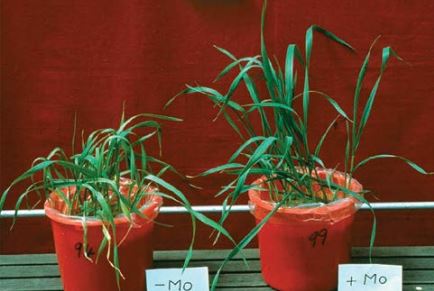 Figure 3: Wheat grown without (left) and with molybdenum. Photo: Snowball and Robson (1988).

Tissue testing can detect molybdenum deficiency, and experimenting with foliar application of molybdenum can demonstrate a response. This would be in the form of improved growth or development of a healthy leaf colour, compared with similar, untreated plants.

Factors that increase the likelihood of a molybdenum deficiency being involved in a plant health problem are:

In most soils, molybdenum present in an unavailable form will be released by liming to correct pH. The effect of liming on molybdenum availability is slow and it may take several months to correct the deficiency. Unless lime is likely to be beneficial for other reasons, it is quicker and cheaper to apply a molybdenum compound to the soil or to the crop.

Molybdenum can be applied mixed with dry fertiliser, or in solution to:

Where copper deficiency has occurred in livestock, or could be induced by molybdenum fertilisers, it is advisable to include copper with the application of molybdenum. Total molybdenum applications to acidic soils should be limited to small amounts, otherwise subsequent liming may release concentrations that cause health problems in grazing stock.

Molybdenum compounds used for crops include molybdenum trioxide, sodium molybdate and ammonium molybdate. Choice of the compound to be used depends on whether it is to be applied with fertilizer or as a solution.

Water soluble forms are ammonium molybdate, which is slow to dissolve in cold water, and sodium molybdate which is sold as fine crystals that dissolve readily in cold water making it the most convenient form for the preparation of solutions for spraying.

Snowball K and Robson AD (1988) Symptoms of Nutrient Deficiencies in Subterranean Clover and Wheat, The University of Western Australia.

The New South Wales Department of Primary Industries maintains information resources on soils and their management,