NEMATODES AS A BIOLOGICAL INDICATOR


Why are nematodes good biological indicators?

Since bacteria and fungi are the dominant component of microbial biomass, it is often considered they provide the best indication of the soil’s biological status. However, they are difficult to measure as there are thousands of different species and they occur in enormous numbers. Also, their life cycles are relatively short (hours or days), and so populations change rapidly in response to changes in environmental conditions such as moisture and temperature. Soil animals, particularly nematodes, are generally considered to be better biological indicators.

There are a number of reasons why nematodes are commonly used as biological indicators: 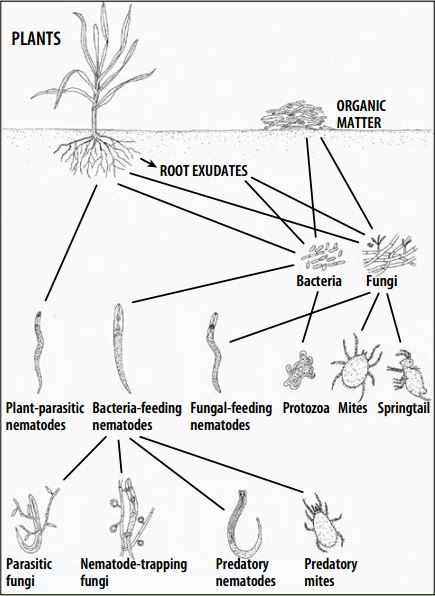 
What is nematode community analysis?

Groupings of nematodes based on their function in soil

Once identified, nematodes can be grouped according to their feeding habits. Five nematode feeding groups occur in soil: plant parasites, bacterial feeders, fungal feeders, omnivores and predators (see factsheet ‘The Nematode Community in Australian Grain-Growing Soils’). Nematodes in each of these feeding groups have quite different ecological roles within the soil food web (figure 1).

Enrichment opportunists: Some bacterial-feeding nematodes colonise soil when it is enriched with an organic amendment. These nematodes are relatively small and produce large numbers of eggs. If a bacterial food source is available, such as when decomposing organic matter is present in soil, populations can increase rapidly to high population densities. When microbial biomass decreases, they cease feeding and become dormant.

Other bacterial feeders: There are many other types of bacterial-feeding nematodes in soil and they are a relatively constant component of the nematode community in agricultural soils. We still have a lot to learn about their ecological roles.

Fungal feeders: Most fungal-feeding nematodes have relatively short life cycles (1–2 weeks). Since fungi are primarily responsible for decomposing crop residues with a high carbon to nitrogen ratio, this group of nematodes is relatively common in no-till grain-growing soils.

Omnivores: Omnivorous nematodes are generalists, as they are able to feed on many different soil organisms. As they are relatively large, they are sensitive to disturbances such as tillage. They are also sensitive to pollutants and excessive inputs of nitrogen fertiliser. The presence of omnivorous nematodes indicates the soil food web is diverse and relatively stable, whereas their absence is a warning sign the soil biology has been disrupted or depleted.

Predators: Large nematodes that prey on other nematodes. Some have an open mouth armed with teeth, but others use a spear to pierce their prey or feed on nematode eggs. They have relatively long life cycles and sensitivity to pollutants. However, those related to bacterial feeders will multiply rapidly and can tolerate contaminants.

Both omnivores and predators are large nematodes sensitive to disturbance and as they usually take several months to complete their life cycles, once lost from the soil food web, it may take months or years for them to return.

Plant parasites: Plant-parasitic nematodes will always be present in agricultural soils, but many are not serious pests.

Nematodes of most concern to the grains industry are root lesion nematode (Pratylenchus) and cyst nematode (Heterodera) which have the capacity to increase to damaging levels on a single annual crop.


What information can be gained from nematode community analysis?

Extracting nematodes from soil and then dividing them by feeding group and life-cycle length is a good way of obtaining a picture of what is happening within the soil food web. Some examples of the type of information that can be obtained from nematode community analysis are given below.

Nematode community analysis is a valuable tool for assessing the impact of land management practices on soil biology, soil health and overall soil condition. Details on how it can be used to provide information on the biological status of grain-growing soils are given in the factsheet ‘A Practical Test to Assess the Biological Status of Australian Grain-Growing Soils’.