Nitrogen is used by the plant to make precursors to plant proteins. As proteins make up much of the content of cells, nitrogen is needed in greater quantity that any other mineral nutrient. Nitrogen is highly mobile within the growing plant allowing it to move the nitrogen to tissues that can use it more effectively. Older leaves tend to exhibit nitrogen deficiency symptoms first. Nitrogen plays an essential role in the production of chlorophyll; deficiency is displayed as yellowing leaves and reduced tillering (figure 1), and leads to reduced crop yields. 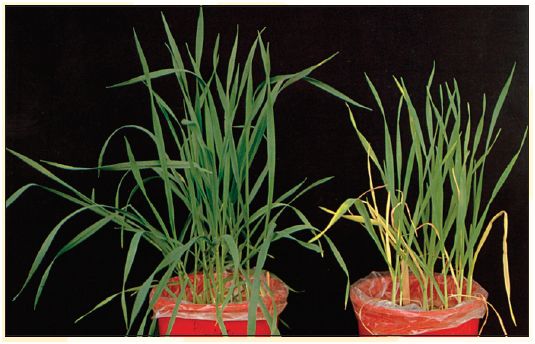 
Nitrogen in the soil

About 95–98% of all natural nitrogen present in the soil is in an organic form, which is gradually mineralised by microbes into inorganic forms (about 2–5% of all N) such as nitrate and ammonium. Mineralisation occurs throughout the growing season, providing a steady, continuous supply of nitrogen to the crop. Fertiliser nitrogen, applied both in inorganic forms and as urea, is rapidly available to plants, but can be lost from the soil before being taken up by the crop.

The urea form of N has to mineralise into the ammonia form of N (NH3) before it undergoes microbial transformation into forms more available to plants (ammonium and nitrate). The NH3 form can be lost as a gas, in a process called volatilisation, prior to conversion into the ammonium and nitrate forms. The positively charged ammonium ion (NH4+) is immobile in soil, does not leach, and is an intermediary in the conversion of organic-N (including urea) to nitrate (NO3-). Generally, ammonium based fertilisers are naturally converted to nitrate in the soil before being taken up by crops. During this conversion a further proportion of N fertiliser is lost to the atmosphere. Losses are influenced by application techniques; minimised with subsurface applications, reduced with incorporation and greatest with unincorporated surface spreading.

Nitrate has a negative charge and is highly mobile in the soil. Nitrate can move readily towards plant roots, but can also be leached out of reach of the plant root system (figure 2). Subsoil constraints, such as soil acidity, may also reduce the efficiency of uptake of NO3- by the crop.

Soil tests only reflect conditions in areas of similar soil type, cropping history and moisture status. Six to seven cores need to be taken to obtain a reasonable degree of accuracy. It is important to sample to a depth of at least 90 cm to include the whole root zone, or at least to the depth of wet soil.

Soil tests conducted prior to sowing won’t account for late fallow mineralisation for the period between soil sampling and sowing; and in-crop mineralisation up until flowering.

Grain yield improvements are mainly caused by increased tiller numbers and grains per ear, both of which are determined early in the life of a wheat plant. A sufficient supply of nitrogen during crop emergence and establishment is critical. Nitrogen use efficiency can be improved by delaying fertiliser application until the crop’s roots system is adequately developed. This can be 3–4 weeks after germination.

Later nitrogen applications can also have yield benefits through increased tiller survival, leaf duration and photosynthetic area. Delaying application however, reduces the chance that economic response to nitrogen will be achieved. An advantage of late applications (1st node visible) is that growers have a better idea of yield potential before applying the nitrogen.

GRDC’s CropMate VarietyChooser app has a calculator to evaluate the yield benefits of late nitrogen topdressing.

The efficiency of a nitrogen regime can be assessed through the grain protein percentage following harvest. The optimum protein percentage in wheat grain varies between cultivars. If crops consistently achieve protein levels below these optimum levels, they are forgoing optimum yield potential. Crops achieving protein levels above optimum may reflect an overuse of fertiliser, as protein payments and yield do not offset the extra cost of nitrogen.

Snowball K and Robson AD (1988) Symptoms of Nutrient Deficiencies in Subterranean Clover and Wheat, The University of Western Australia.