Ancient and highly weathered soils with very low levels of natural phosphorus (P) dominate much of Australia, particularly Western Australia. Many of our agricultural soils are among the most acutely phosphorus deficient in the world, and profitable crop production has only been possible through significant applications of P-fertilisers.

Phosphorus is an essential element for plant and animal growth and important during cell division and growth.

Complex soil process influence the availability of phosphorus applied to the soil, with many soils able to ‘tie up’ phosphorus, making it unavailable to plants. Your soil’s ability to do this must be measured when determining requirements for crops and pastures.

Phosphorus deficiency is difficult to detect visually in many field crops, as the whole plant tends to be affected. Stunted growth, leaf distortion, chlorotic areas and delayed maturity are all indicators of phosphorus deficiency (figure 1). Phosphorus is concentrated at the growth tip, resulting in deficient areas visible first on lower parts of the plant. 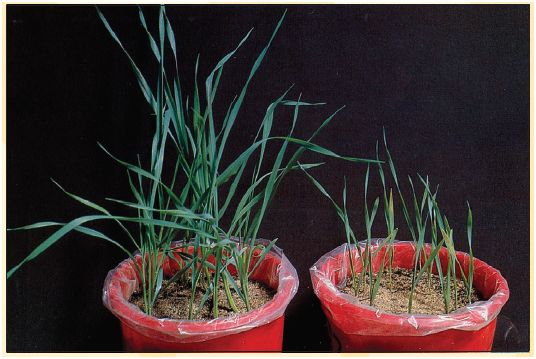 Figure 1: Stunted growth and yellowing of leaf tips in phosphorus


A purple or reddish colour associated with accumulation of sugars, is often seen in deficient plants, especially when temperatures are low. Deficient cereal crops are often poorly tillered. Visual symptoms, other than stunted growth and reduced yield are not as clear as are those for nitrogen and potassium. At some growth stages, phosphorus deficiency may cause the crop to look darker green.

The role of phosphorus in cell division and expansion means crop establishment and early growth is highly dependent on sufficient sources of the nutrient. Trials have shown significant agronomic penalties from applying phosphorus more than 10 days after germination. Most of these phosphorus timing trials indicate the optimum time for P-fertiliser application is before or during seeding.

Phosphorus fertiliser is mostly applied in a water soluble form which can be taken up by plants, retained by soil and lost through erosion and leaching (figure 2). In the water soluble form phosphorus is not stable, and rapidly reacts in the soil (principally with iron, aluminium and calcium) to form insoluble, more stable compounds. Therefore, competition between the soil and plant roots for water soluble phosphorus arises, with only 5 % to 30 % of the phosphorus applied taken up by the crop in the year following application. Furthermore, at low pH (< 5.0), the soil’s ability to fix phosphorus rises dramatically, thereby decreasing plant availability.

Knowing the soil’s ability to fix phosphorus is vital in determining the rates of fertiliser application. A high fixing soil will require significantly more P-fertiliser, and commercial tests have been developed to determine this. These are used in conjunction with other soil and crop traits to optimise fertiliser P requirements:

1. Reactive Iron Test measures the amount of iron extracted from soil by ammonium oxalate. This indirect measure of a soil’s ability to fix P is only accurate when soil is adjusted for pH.

2. Phosphorus Retention Index (PRI) is a direct measure of P-sorption and involves mixing a quantity of soil in solution with a single amount of P for a set period of time. The amount of P remaining in solution measures the soil’s ability to fix phosphorus.

3. Phosphorus Buffering Index (PBI) is similar to PRI except that a range of P rates are mixed with the soil, and the index is adjusted for pH. This is becoming the Australian standard for measuring soil P-sorption.

4. Diffuse Gradient Technology Phosphorus (DGT-P) is a relatively new method currently being tested for use with Australian soils, and mimics the action of the plant roots in accessing available phosphorus (see DGT-P factsheet).

Phosphorus that is not removed from the soil system remains as (i) undissolved in fertiliser granules, (ii) adsorbed by the soil, or (iii) present in organic matter. These sources all supply some P for plant uptake and thus maintain a residual fertiliser value. A long term regime of applying P fertiliser decreases the capacity of the soil to adsorb phosphorus, giving increased effectiveness of subsequent applications.

Each crop species will remove different amounts of phosphorus from soil following harvest (table 1), and must be accounted for during nutrient budgeting. Canola in particular removes more than twice the amount of phosphorus than cereal crops such as wheat and barley.


Table 1: Phosphorus removed from one tonne of grain for various crops.


Leaching and placement of phosphorus

Phosphorus movement in soil varies depending on soil type, although it generally stays very close to where it is placed. With the exception of deep sandy soils, very little phosphorus is lost to leaching. Tests on loamy and clay soils with a history of P-fertiliser application show a rapid reduction in phosphorus with depth.

Placing high rates of phosphorus close to germinating seedlings can reduce germination and establishment, and should be placed at least 2 cm below the seed. Some considerations when banding phosphorus are:

Figure 2: The phosphorus cycle in a typical cropping system is particularly complex, where movement through the soil is minimal and availability to crops is severely limited (from Glendinning, 2000.

Snowball K and Robson AD (1988) Symptoms of Nutrient Deficiencies in Subterranean Clover and Wheat. The University of Western Australia.

This soilquality.org.au fact-sheet has been funded by the Healthy Soils for Sustainable Farms programme, an initiative of the Australian Governments Natural Heritage Trust in partnership with the GRDC, and the WA NRM regions of Avon Catchment Council and South Coast NRM, through National Action Plan for Salinity and Water Quality and National Landcare Programme investments of the WA and Australian Governments.