Traditionally, Sodosols in Tasmania have been used for pasture production but they are being used increasingly for cereal, pea, poppy and potato cropping. Sodosols are difficult to crop as they usually become wet and unworkable in winter and occasionally flood. The clay textured B-horizon impedes water movement and root development, and the lighter textured A-horizons suffer from waterlogging or water deficit, depending on the weather, and are prone to crust formation and hard setting.

Cultivation for crop sowing and harvesting is often carried out when soil moisture content is greater than ideal, which results in soil structure problems such as compaction and hard setting. Waterlogging occurs when the soil is so wet there is insufficient oxygen in the pore space for plant roots to be able to adequately respire (see Waterlogging fact sheet).

Prevention of waterlogging in soils requires the achievement of two objectives:


When water tables are drained from soils with poor structure, insufficient large pores exist to supply adequate oxygen for plant roots to overcome the effects of waterlogging. In the shallow texture contrast soils that are common throughout Australian agricultural areas (McKenzie et al. 2004), large pores have to be created and maintained by soil management practices that enhance root growth and populations of associated soil organisms.

Surface drains alone do not prevent waterlogging because they remove only surface water. They do not: (i) drain the surface soil (the gradient into the drain from the soil is very small), and (ii) create large pores for aeration. On low slope country, the movement of surface water into shallow drains is slow and inefficient.

Raised beds (figure 1) are an excellent means of eliminating waterlogging, and are designed to create and maintain: 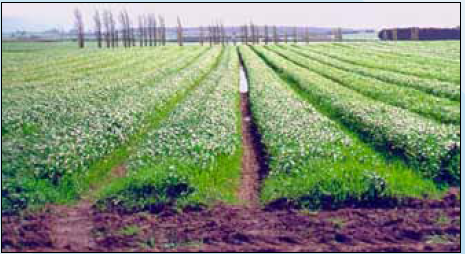 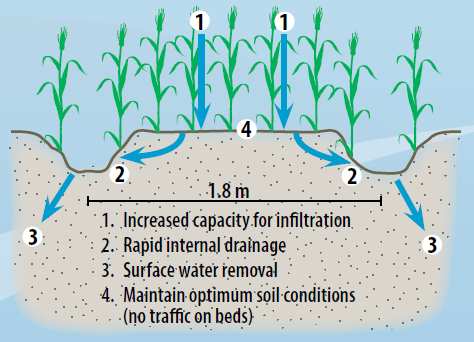 Figure 2: Cross-section diagram of a raised bed and the way it operates to drain, aerate and prevent waterlogging.


Raised bed farming requires machinery to pass up and down the furrows, creating a controlled traffic style of farming (see Controlled Traffic Farming fact sheet). Furthermore, provided the furrows empty all the water that enters, excess water draining from the beds will ensure beds do not subside. Well maintained beds tend to maintain a low density and have a low need for maintenance.

In many years, raised beds allow for spring planting of crops on duplex soils where otherwise waterlogging would have prevented machinery access and successful crop planting and establishment. Yield improvements can be expected from the raised beds but depend on the season and locality. Research in Tasmania found raised beds had greater infiltration, lower bulk density, lower shear strength at 100 – 200 mm depth and lower penetration resistance than neighbouring undrained paddocks. These improved soil physical conditions result in better drained and aerated soil for plant growth than conventionally managed sites. The reduced penetration resistance was confined to the upper 270 mm of the soil profile which had been worked by tillage machinery. Smaller dry soil aggregates accompanied these changes, indicating that some of the benefits were probably derived from greater tillage intensity associated with forming the beds. These benefits generally remained 3 to 4 years after bed forming.

All raised bed installations must include appropriate surface drains. The amount of extra water running from raised beds is not trivial, and there must be sufficient fall to allow water to exit the paddock within 24 – 48 hours after significant rainfall.

The prime objective for installing raised beds is to drain excess water from the root zones of crops and pastures. Most land prone to waterlogging has a low slope and shallow texture contrast soil. Precision contour surveys are essential (i) to detect the dominant direction of slope; (ii) to identify humps and hollows that will change the direction of surface flows; (iii) to identify the need for local drains or ‘Cross Drains’ to remove water from small depressions; and (iv) to plan the orientation of raised beds and the best location to dispose of water from the major drains at the lower end of the beds.

There are five key issues that need to be considered when deciding on the layout of an area of raised beds. These are bed orientation (north–south), surface drainage (figure 3) (cross drains, catch drains), waterways, access, and matching machinery. 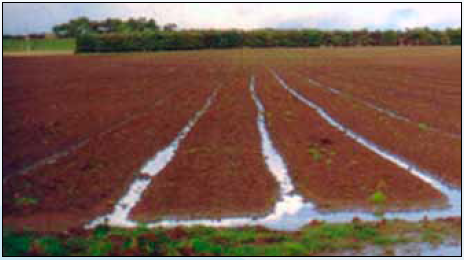 Figure 3: Good surface drainage at the end of the furrows is essential to allow water to exit the paddock.

Raised beds are constructed with a special-purpose implement called a bed-former, and come in 3-point linkage and trailing models. Some makes are able to alter bed width.

The best soil moisture conditions in which to construct beds is the same as that for deep cultivation.

The machinery needed to crop raised beds requires only one additional, specialised implement. This is a bed-former, which also converts to a bed-renovator. The remaining machinery is exactly the same as that needed to crop normal seedbeds, except for some minor adaptations to allow it to track in furrows and operate on raised beds. Some adjustments may be needed, for example, realignment of seeding units for crop row spacing that does not allow for unseeded furrows, or perhaps shifting of the depth wheels.