Waterlogging occurs when the soil is so wet there is insufficient oxygen in the pore space for plant roots to be able to adequately respire (see Waterlogging fact sheet). When the waterlogging is identified the first thing to consider is improving drainage. Options vary from shallow surface drains (i.e. Spoon- and ‘W’-drains) to more intensive drainage using wide-spaced furrows to raised beds. The efficiency of surface drainage increases respectively as does the degree of management. This fact sheet is a summary of A Manual for Raised Bed Farming in Western Australia (DAWFA Bulletin 4646).

Prevention of waterlogging in soils requires the achievement of two objectives:


When water tables are drained from soils with poor structure insufficient large pores exist to supply adequate oxygen for plant roots to overcome the effects of waterlogging. In the shallow texture contrast soils that are common throughout Australian agricultural areas (McKenzie et al. 2004), large pores have to be created and maintained by soil management practices that enhance root growth and populations of associated soil organisms. Why surface drains alone do not prevent waterlogging? Surface drains remove only surface water. They do not:


Raised beds (figure 1) are an excellent means of eliminating waterlogging, and are designed to create and maintain:

Raised bed farming requires machinery to pass up and down the furrows, creating a controlled traffic (see Controlled Traffic Farming fact sheet) style of farming. Furthermore, provided the furrows empty all the water that enters, excess water draining from the beds will ensure beds do not subside. Well maintained beds tend to maintain a low density and have a low need for maintenance. 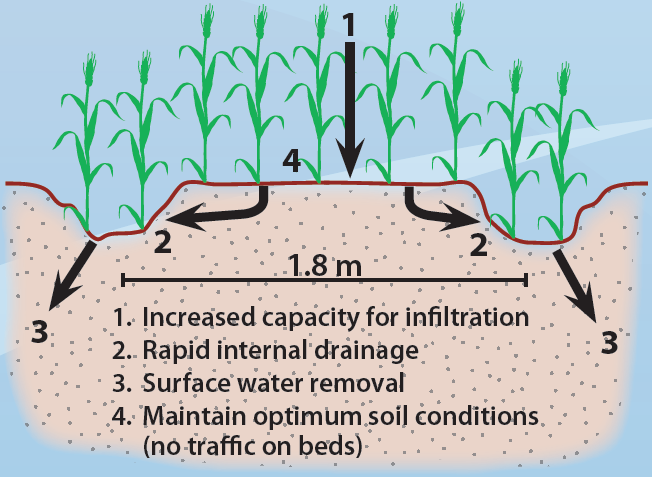 Figure 2: Cross-section diagram of a raised bed and the way it operates to drain, aerate and prevent waterlogging.

All raised bed installations must include appropriate surface drains. The amount of extra water running from raised beds is not trivial, and there are legal responsibilities that farmers must abide by with respect to the safe disposal of excess water from their land.

Research has shown that the extra runoff from areas of raised beds is likely to be between 5 and 10 per cent of growing season rainfall.

The prime objective for installing raised beds is to drain excess water from the root zones of crops and pastures.

Most land prone to waterlogging has a low slope and shallow texture contrast soil and precision contour surveys are essential (i) to detect the dominant direction of slope; (ii) to identify humps and hollows that will change the direction of surface flows; (iii) to identify the need for local drains or ‘Cross Drains’ to remove water from small depressions; and (iv) to plan the orientation of raised beds and the best location to dispose of water from the major drains at the lower end of the beds.

There are five key issues that need to be considered when deciding on the layout of an area of raised beds. These are bed orientation (north-south), surface drainage (cross drains, catch drains), waterways, access, and matching machinery.

The machinery needed to crop raised beds requires only one additional, specialised implement. This is a bed-former, which also converts to a bed-renovator. The remaining machinery is exactly the same as that needed to crop normal seedbeds, except for some minor adaptations to allow it to track in furrows and operate on raised beds. Some adjustments may be needed e.g. re-alignment of seeding units for crop row spacing that does not allow for unseeded furrows, or perhaps shifting of the depth wheels.

Raised beds are constructed with a special-purpose implement called a bed-former, and come in 3-point linkage and trailing models (figure 3). Some makes are able to alter bed width.

Bed-formers specially adapted for the fragile structure of coarse textured surface soils have furrowers and a gang of discs. The furrowers are set at the required spacing (centre-to-centre distance between beds), and the discs trail behind the rear edge of the furrowers. The furrowers excavate soil to the depth of deep cultivation and push the spoil to the left and right. The discs then spread the spoil evenly across the soil that passes between the furrowers, leaving a trench about 45 cm (18") wide. The best soil moisture conditions in which to construct beds is the same as that for deep cultivation.

Figure 3: Raised bed former, with a folder-up marker arm on the left.

Farmers seeking to decide whether to adopt raised beds should be concerned about the ability of this technology to pay for itself, particularly if money has to be borrowed to make the change. An investment analysis should always be considered when adopting raised bed farming, because it is a very different way of integrating soil and water conservation into a farming system, and it requires a considerable level of planning and investment. Yield improvements (table 1) can be expected from the raised beds but depend on the season and locality.


Table 1: Average grain yield over 5 years of trials and the levels of statistical significance from the raised beds compared to the control.