Root lesion nematodes (RLN) are microscopic worm-like animals (figure 1) that use a syringe-like ‘stylet’ to extract nutrients from the roots of plants, such as wheat and canola. Pratylenchus neglectus and P. thornei are the most common RLN species in Australia, where they have been shown to cause significant yield losses.

RLN’s affect all cropping regions of southern Australia, and are an increased risk in areas where minimum tillage has been adopted. Under conventional tillage operations, disruption of dry topsoil is sufficient to kill many RLN’s over-summering in a ‘dehydrated’ state.

Commercial pre-season testing of soil by the Predicta-BTM root disease testing service determines levels of P. neglectus and P. thornei present using a DNA detection technique. During the season, plants with suspected RLN infections should be sent to a laboratory for extraction and identification. 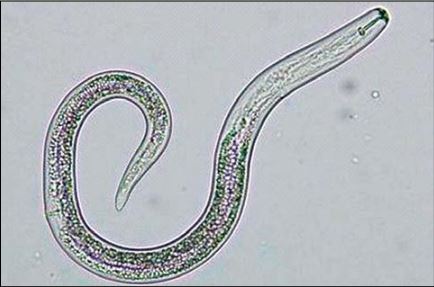 Figure 1: Microscope image of a root lesion nematode. Notice the syringe-like “stylet” at the head end, which is used for extracting nutrients from the plant root. This nematode is less than 1 mm long. (Photo: Sean Kelly, DAFWA, Nematology.)

Nematode symptoms are commonly confused with nutritional or other disease problems so the best way to confirm diagnoses is by laboratory test.

Above ground, crops appear patchy with unthrifty and/or yellowed plants with reduced tillering, not unlike the symptoms of water or nitrogen deficiency (figure 2).

Below ground, early infection symptoms show brown root discolouration, with fewer and shorter root branches (figure 3). In severe cases, plants are easily pulled from the ground as a result of root destruction. 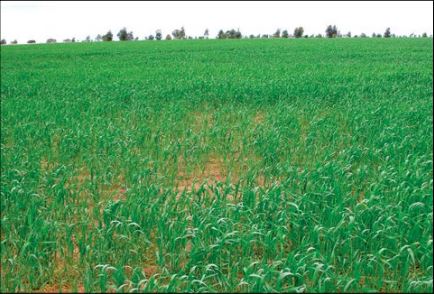 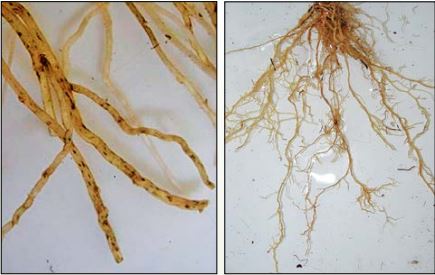 Prior to the growing season, RLN’s are best managed by ensuring volunteer host crops and weeds are kept to a minimum, and resistant crop varieties are seeded where possible (table 1).

Crops that are not susceptible to the dominant species of RLN within a paddock should be used as a break-crop where a medium threat is detected. If RLN levels are high it may be necessary to use two consecutive resistant crops to reduce numbers sufficiently.

Early sowing also allows the crop to establish a solid root system before RLN’s can have a significant effect, and good nutrition is very much related to this.

As nematodes are spread by surface water, and vehicular/machinery movement, employing strict hygiene measures will reduce the risk of contamination.


Table 1: Susceptibility of various crops to the most common and yield limiting species of RLN.