Surface soil structure decline generally results in one of two things – hardsetting or crusting. A surface crust is typically less than 10 mm thick and when dry can normally be lifted off the loose soil below (Mullins et al., 1990). Crusting forces the seedling to exert more energy to break through to the surface thus weakening it. A surface crust can also form a barrier reducing water infiltration.

Soil structure breakdown caused by rapid wetting can lead to hard-setting. The unstable soil structure once wet, collapses and then shrinks as it dries. This leads to a ‘massive’ soil layer with little or no cracks and greatly reduced pore space (Needham et al., 1998). This hard-set ‘massive’ structure is associated with poor infiltration, low water holding capacity and a high soil strength (figure 1). In many instances, this causes patchy establishment and poor crop and pasture growth.

Naturally hard-setting soils are unable to develop water stable aggregates (Mullins et al., 1990). This means that during wetting, soil aggregates start to swell and become soft. This occurs prior to ‘slumping’ (also referred to as ‘slaking’) when the aggregates collapse and disintegrate.

Hard-setting can also occur on soil with a high exchangeable sodium percentage (ESP) through ‘dispersion’ of soil aggregates. This results in clay and silt becoming suspended in soil solution and causing a breakdown of aggregates (Mullins et al., 1990). Other factors that influence dispersion of soil aggregates include soil electrical conductivity (EC), calcium/magnesium ratios and organic matter content (Needham et al., 1998). 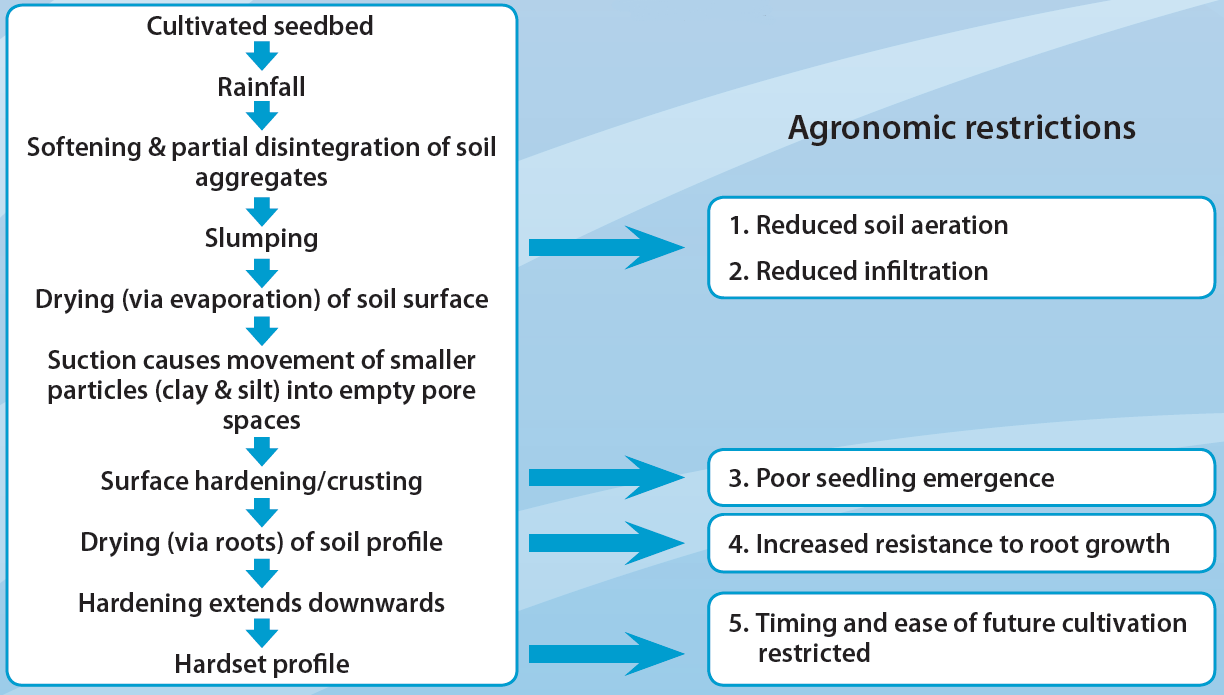 
It is important to make the distinction between crusting, hard-setting and compacted soils. Soil compaction results from repeated or long term movement of agricultural machinery and stock compacting (or ‘squashing’) the soil profile when it is moist, often remaining hard when wet. In many cases, this compaction layer occurs at depth. Crusting refers to a surface crust, and hard-setting generally affects the whole A1 horizon (Mullins et al., 1987), but in both cases the soil softens when moist. This gave rise to the term ‘Sunday soils’ – the soil being too wet to seed Saturday and too dry to seed Monday! 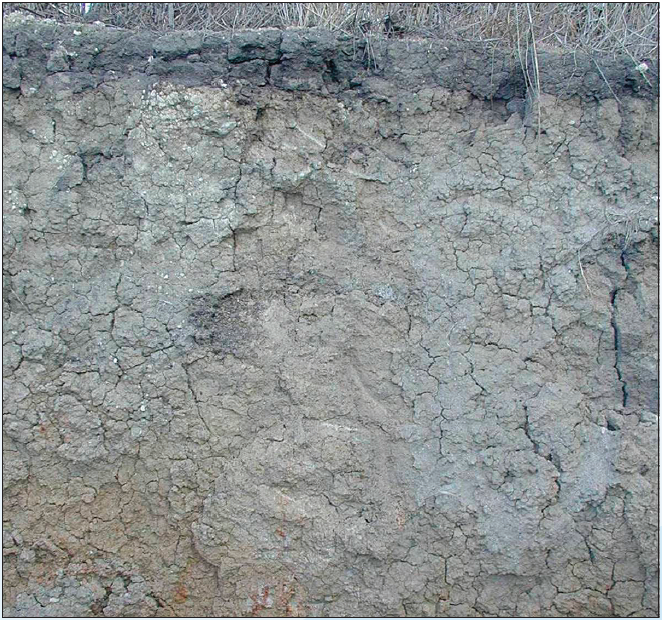 Figure 2: An example of a soil type prone to hardsetting – grey clay from the WA Great Southern region. Note the small topsoil depth (less than 10 cm).

To decrease the level of crusting or hard-setting in soils, it is necessary to stabilise soil structure. For example, amelioration of a hard-setting grey clay was found to be most effective using management practices that increased soil organic matter and reduced trafficking, thereby improving soil structure (Hamilton et al., 2005). Removing or reducing stock when the soil is saturated also helps avoid compaction, smearing and ‘pugging’ of the soil surface.

Another option for stabilising soil structure in soils prone to hard-setting or crusting is through the addition of gypsum on dispersive soils. This effectively displaces sodium, and causes clay particles to bind together helping to create stable soil aggregates. A resulting reduction in the ESP and increase in the calcium/magnesium ratio may be observed. Addition of lime also adds calcium to the soil, but is generally only used for soils with a low pH.

Bulk density (see Bulk Density fact sheets) is often used as an indicator of soil structure. It is the measure of the oven dry weight of soil in a known volume normally reported as g/cm3. A soil corer is hammered into the soil and removed without disturbing the soil inside (figure 3).

Bulk density is a good indicator of soil porosity – the higher the bulk density the lower the total soil pore space (Needham et al., 1998). This will also dictate the compressibility of soil but is not always related to soil strength (Needham et al., 1998). Coarse textured soils may already have a high bulk density (> 1.6 g/cm3) so compaction forces will only increase it slightly but increase soil strength significantly. 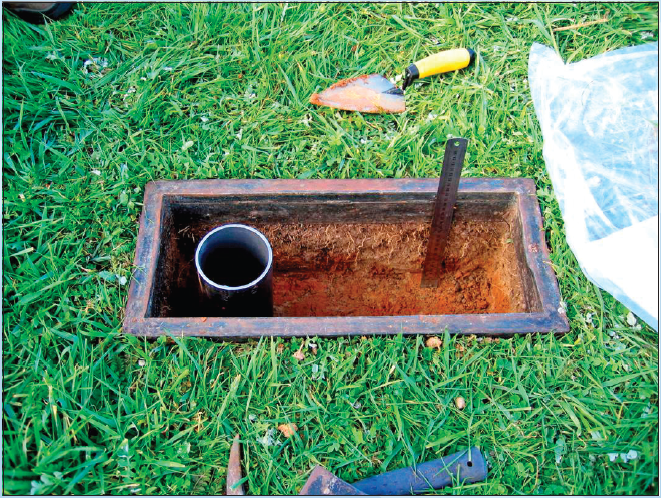 Figure 3: An example of bulk density sampling where the topsoil has been sampled and the core is ready to be hammered into the 10 to 20 cm layer.