Surface soil structure decline generally results in one of two things—hardsetting or crusting. A surface crust is typically less than 10 mm thick and when dry can normally be lifted off the loose soil below (Mullins et al. 1990). Crusting forces the seedling to exert more energy to break through to the surface, thus weakening it. A surface crust can also reduce water infiltration and increase runoff.

Soil structure breakdown caused by rapid wetting can lead to hardsetting. Once soils with an unstable soil structure become wet, they can collapse and then shrink as they dry. This leads to a ‘massive’ soil layer with little or no cracks and greatly reduced pore space. This hardset massive structure is associated with poor infiltration, low water holding capacity and a high soil strength. In many instances, this causes patchy establishment and poor crop and pasture growth.

Naturally hardsetting soils are unable to develop water-stable aggregates. When they become wet, the aggregates that make up these soils swell, become soft, and eventually collapse and disintegrate—a process known as slumping or slaking (figure 1).


Hardsetting can also occur when soils are sodic. Sodic soils have an excess of sodium ions relative to other cations (calcium, magnesium and potassium). A high proportion of sodium (also referred to as a high exchangeable sodium percentage or high ESP) can lead to soil dispersion. Dispersion is the disintegration of clay aggregates into individual particles when wet. In the paddock, high surface soil sodicity leads to surface crusting, a cloddy seedbed, poor water infiltration (more run-off) and increased water-logging (figure 2). 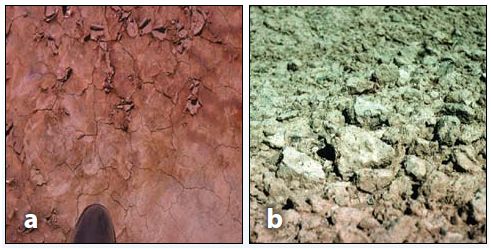 Figure 2: Soil crusting (a) and cloddy seedbed (b) associated with high concentrations of exchangeable sodium.


Soil types more prone to soil structure decline are those with high concentrations of sodium relative to other cations, and lighter textured soils (sandy loams to clay loams; between 10 to 3 5% clay)—particularly those low in organic matter (< 2 %).

It is important to make the distinction between crusting, hardsetting and compacted soils. Soil compaction results from repeated compression or squashing of the soil by agricultural machinery and/or stock. Compacted layers often occur at depth, and often remain hard even when wet. Crusting refers to a crust that forms on the soil surface, and hardsetting refers to soils where aggregates in the whole of the topsoil are not water stable. In both crusting and hardsetting soils, the soil softens when moist. This gave rise to the term ‘Sunday soils’—the soil being too wet to seed Saturday and too dry to seed Monday!

To decrease the condition of crusting or hardsetting in soils, it is necessary to stabilise soil structure. On lighter textured soils, this is best achieved by increasing soil organic matter, surface cover and reducing soil trafficking (see How much carbon can soil store? and Controlled Traffic Farming— Queensland factsheets). Removing or reducing stock when the soil is saturated also helps avoid compaction, smearing and ‘pugging’ of the soil surface.

Where soils are sodic, the addition of gypsum may also help to ameliorate soil dispersion. The addition of gypsum replaces the excess sodium in the soil with calcium, which causes clay particles to flocculate and bind together, helping to create stable soil aggregates. In soils with moderate surface sodicity (ESP = 12), gypsum application at 2.5–5.0 t/ha has been found to significantly improve wheat grain yield in Queensland (figure 3). 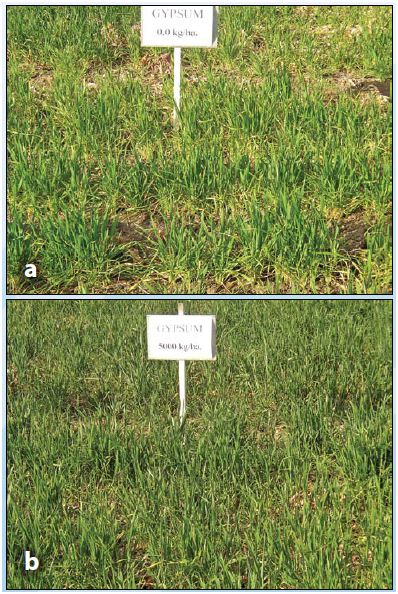 It is possible to assess the slaking and dispersion characteristics of a soil using a test known as the emerson disperson test. During this test a small amount of soil is placed into a container filled with distilled water or rainwater (either in the field moist state or after the soil is remoulded and brought to field capacity). After 5 minutes the aggregates are observed and rated depending on whether they have collapsed or are beginning to disperse (figure 4). Soil that disperses or slumps following this test is considered to be unstable and management to counter the effects of crusting and/or harsetting will be needed.

Figure 4: Soil being tested using the emerson dispersion test. The soil in the photograph ranges from water stable on the left to highly sodic on the right.