Soil compaction is the process of increasing the density of soil by packing the soil particles closer together causing a reduction in the volume of air. Soil water acts as a lubricant increasing compaction when a load is imposed on the soil. If near saturation, however, the load is likely to exceed the soil strength and bearing capacity, resulting in excessive wheel slippage and rutting as well as soil mixing and smearing. It has been estimated that, given conventional tillage practices and other planting-harvesting farm operations, as much as 90 % of a paddock will be wheel tracked on an annual basis and that much of the area receives 4 or 5 wheel passes.

Compaction usually results in less plant root proliferation in the soil and lowers the rate of water and air movement. Because of the root restriction the amount of water available to the crop is often decreased. Slower internal drainage results in poorer subsurface drain performance, longer periods of time when the soil is too wet for tillage following rainfall or water application, increased denitrification and decreased crop production. Increased compaction also adds to the energy consumption by tractors for subsequent tillage.

Most effects of compaction are detrimental. However, in some cases, slight compaction near seeds can aid germination and improve plant growth in times of low soil moisture caused by low rainfall or low water-holding capacity soils.

Deep soil compaction is excessive soil compaction below the normal annual tillage depth, usually 15–20 cm. It is of greater concern than near surface compaction because it is a difficult problem to solve and may take many years, or even decades, under vigorous pasture to rehabilitate.

Research on Tasmanian soils has shown that deep sandy soils are prone to deep soil compaction at 20–40 cm depth (figure 1). This has been associated with the use of heavy pea and potato harvesters when the soils are moist or wet. Near surface compaction (0–5 cm) occurs on other soils, which results in the formation of clods and restricted root growth. Near surface compaction can be relieved relatively easily and is likely to be short lived.

The volume of soil compacted by a wheel pass varies with soil type, soil moisture, tire size, pressure and total load. Pressures are transmitted deeper into wet soil than in dry soil by the same tyre size and wheel load. 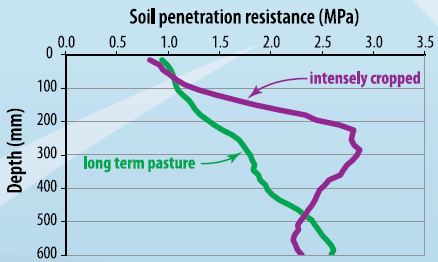 Dig a small pit crossing the crop root zone, use a knife to examine the rooting pattern and test the resistance to penetration. Note denser zones of soil and see if they coincide with a reduction in root growth. By examining the soil profile it is possible to identify a compacted soil layer because it is physically stronger (harder) and more dense than the soil above or below it. Compacted layers often have distinct massive or blocky appearance and are a clearly defined horizontal layer that occurs between 10 and 40 cm.

This method measures compaction by the resistance encountered as you push down through the soil. It is useful for detecting dense soil layers that may resist root penetration or growth. Hand probes are basically steel rods that are pushed into the soil by hand. Compacted layers are more difficult to push through, and easier once past the compacted zone. Hand probes can be made from steel rod (about 8–10 mm diameter) or heavy gauge (3 mm) fencing wire about 40 cm long with one end looped to make a handle. Depth increments can be added.

A cone penetrometer works by the same principle as the hand probe except that it measures and records the force required to insert a standard sized cone into the soil profile. The penetrometer is inserted at a steady speed by hand and the instrument uses a gauge to measure the force required to penetrate the soil at a given depth, measured in megapascals (MPa) or kilopascals (KPa). The data are stored in a data logger and can then be downloaded and the strength of the soil profile assessed. In general, crop root growth starts to be restricted when the penetration resistance exceeds 1.5 MPa and is severely restricted at 2.5 MPa or more.

All three methods above are relative tests, and should be compared to areas with similar soils and where compaction is known not to be a problem.

Table 1: Rough guidelines for the minimum bulk density at which a root restricting condition will occur for various soil textures.

This will deal with tillage-induced compaction layers occurring just below the normal working depth of the primary tillage implement. The tillage depth is decreased in a wet year and is increased in a year when soil is dry enough to shatter a compacted layer.

This is normally a long-term method of reducing compaction. A diverse rotation is essential to stabilise and build soil aggregates. Crops should include both deep rooted and fibrous rooted crops.

Deep ripping involves breaking up the hard pan using strong tynes usually to a depth of 30–40 cm. This should be attempted only when soil is moist to dry and crumbles at the depth you are ripping. Operating depth should be no more than a few centimetres below the zone of compaction because operating any deeper uses more energy and risks the potential of deeper compaction. Yield benefits resulting from ripping have been measured for various soil types ranging from sands to clay loams but in heavier textured soils benefits can sometimes be short lived due to re-compaction by machinery.


Ways to reduce and prevent compaction

Since compaction problems are likely to persist for a prolonged period of time, the best defence is avoiding the problem altogether.

Delroy ND, Bowden JW (1986) Effect of deep ripping, the previous crop, and applied nitrogen on the growth and yield of a wheat crop. Australian Journal of Experimental Agriculture 26: 469-479.