Soil structure describes how mineral particles and organic matter are arranged to form aggregates, as well as how pore spaces are arranged within and between aggregates. Soil structure is the clods and aggregates that you can see rather than soil texture which you can feel. Soils with degraded structure can result in low yields and are difficult to manage due to a restricted range of soil wetness for tillage operations. If a soil has poor structure this can lead to problems with drainage due to the blocking of soil pores resulting in a decrease in the rate at which water can infiltrate the soil and drain through the soil. Compaction can lead to reduced aeration when wet, particularly on heavier textured soils such as Ferrosols, resulting in restricted volumes of soil available for root growth. The ability of plants to penetrate the soil is also reduced when structure is poor, which affects access to both soil nutrients and moisture, and so crop yields. Soil compaction leading to increased soil strength can limit plant growth by restricting root elongation as well as limiting the range of tillage options for soil preparation. Poorly structured soils are more likely to form a surface crust after heavy rainfall and are more easily eroded by wind or water.


How to assess soil structure

The first step in soil structure assessment is to consider whether the paddock history could have resulted in poor soil structure. Evidence could include a wet crop harvest, wheel ruts running across parts of the paddock, areas of poor plant growth, weed incursion, or greater susceptibility to erosion than neighbouring paddocks. The next step is to use a spade to dig a hole. If the soil is hard to dig, then this may indicate compaction and structure degradation. The structure status of a topsoil can be assessed visually using a pictorial scorecard (over page) developed for local Tasmanian soils. The method is to use a spade to dig a hole approximately 300 mm square to the base of the topsoil. Take a 50 mm wide vertical slice of topsoil from the edge of the hole and place soil on a clean surface, such as a fertiliser bag. 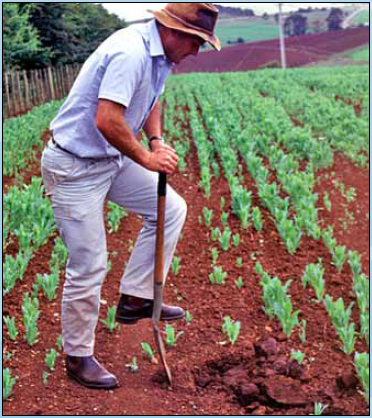 
Use your hands to break the slice of soil apart, noting the force required and the resulting clods or aggregates. It is better to do several quick scores in a paddock than to labour over one score. It helps to carry with you soils with different scores for comparison. Compare the soil in the paddock with soil from under the fence line which has not been compacted by stock or machinery. A structure score of 6 or less is considered degraded as such scores have been correlated with decreased potato yield on Ferrosols in north-west Tasmania and decreased poppy yield on Dermosols in the northern Midlands. If you can see a soil structure problem, it is costing you money in lost yield.

Good structure is characterised by many rounded, irregularly shaped aggregates of 2–10 mm diameter, with larger aggregates having rough surfaces and many holes for good aeration. Aggregates have rough surfaces which are often broken by crop stubble and other plant residues. Poor structure is characterised by large firm clods of 20–100 mm diameter, that are angular with smooth faces and no pores. The clods and overworked soil break into loose, fine powdery soil. Degraded soil is hard to dig, crusting is often visible following sealing by rain, particularly on sandy loam textured soils and surface water ponding occurs. It is important to note that abundant actively growing fine plant roots need to be present in a soil to get a score of 10. This is because plant roots are intimately associated with forming and maintaining soil structure. 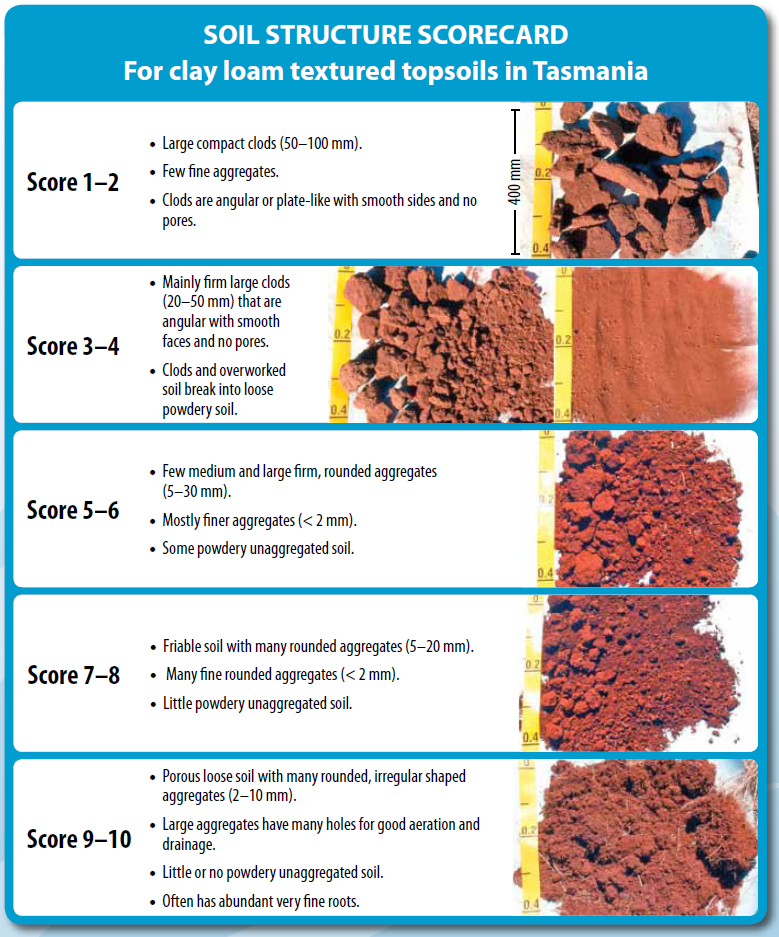