Measuring Soil Texture in the Laboratory

Particle size analysis (PSA) determines the relative amounts of sand, silt and clay in a soil. These size fractions are the mineral component of a soil and together determine soil texture. PSA is a laboratory alternative to field texturing (see Measuring Soil Texture in the Field fact sheet) and offers a more reliable determination of particle size distribution. There is only an approximate correlation between hand texturing and PSA (McDonald et al., 1998), because hand texturing relies on qualitative interpretation of texture while PSA measures exact amounts of individual particle sizes.

Soil texture is an inherent soil quality property that has a major influence on several other properties that influence agricultural potential (White, 1997). In particular soil texture influences nutrient retention, water storage and drainage. Soils with a higher proportion of sand retain less nutrients and water compared to clay soils.

Greater than 2 mm and include coarse quartz, rock fragments and cemented material. This is commonly called the ‘gravel fraction’.

Comprise quartz and resistant primary minerals such as mica. Sand particles are between 2 mm and 20 microns in size (Note: there are 1000 microns in 1 mm).

Silts are typically composed of quartz and small mineral particles such as feldspars and mica, and are between 2 and 20 microns in diameter.

Clays are made up of secondary clay minerals and oxides/oxyhydroxides of iron and aluminium, and are less than 2 microns in diameter.

Soil data from a range of projects conducted across the state is constantly added to the soils database managed by the Department of Agriculture and Food, Western Australia. Figure 1, taken from McArthur (1991), shows the soil types characteristic of south-western Australia. 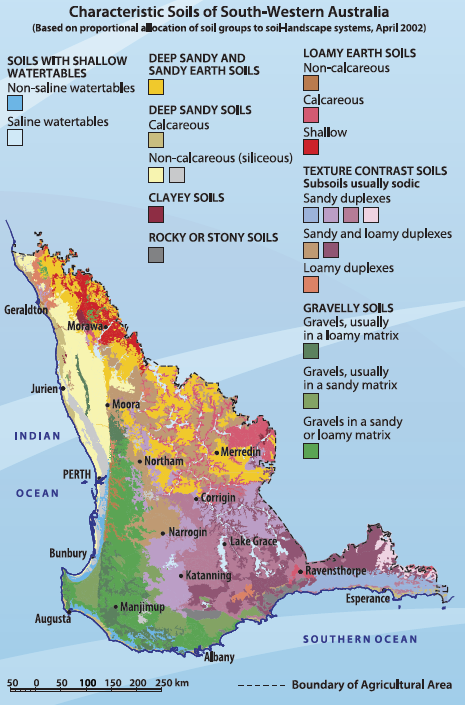 PSA is a reliable, reproducible technique that eliminates factors that may affect field texture such as organic matter content, clay mineralogy, cation composition and the presence of cementing agents (Bowman and Hutka, 2002). The method comprises two parts, dispersion of the soil and separation of the particles into size groups.

Fractionation involves removing each particle size group (sand, silt and clay) from a pretreated soil and water mixture settled in a cylinder (figure 2). This is achieved by allowing the soil particles of different size to settle out of solution at different times (small clay particles take the longest). The fractions are subsequently dried and weighed and the sand, silt and clay must add

up to 100%. Some calculations are needed for this method including the use of a scaling factor for the pipette analysis and a calculation for the sieve analysis. For a complete method, refer to Bowman and Hutka (2002).

Figure 2: Cylinder used for fractionation of sand, silt and clay particles. The sand fraction settles first followed by the silt then the clay fractions.

The soil texture triangle (figure 3) is used to convert particle size distribution into a recognised texture class based on the relative amounts of sand, silt and clay as a percentage, for example: 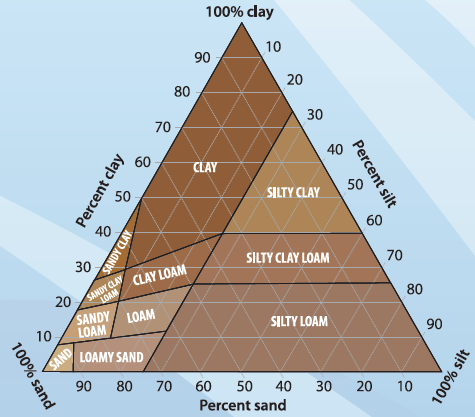 Figure 3: Once soil fractionation is complete a soil textural triangle is used to determine soil texture. Image adapted from Hunt and Gilkes (1992).


The grid on the triangle allows you to move to the left or the right of your position running parallel with either side of the triangle. It is best to start at the base with the sand. Position your finger along the base line at the 50% mark. Move your finger up the line running parallel with the right side of the triangle. Simultaneously use another finger to trace a line from the 30% silt mark until the two meet. Your two fingers will always meet at clay for the remaining percentage, in this case 20%. This is always the case that the first two sizes chosen will lead you to the third.