Compacted subsurface layers may be an inherent feature of a soil, resulting from natural soil formation processes or be created by land management practices. Where land management is responsible, the most common causes of compaction are compression of the soil by stock or agricultural equipment when the soil is moist and loose. Compacted layers generally form between 10 and 40 centimetres.

A compacted soil lacks the interconnected air spaces that are essential to the movement of water, gases and plant roots. Crop yields are most affected by compaction in dry years when plant roots, unable to penetrate compacted layers, cannot access much-needed subsoil water and nutrients. Water use efficiency is also greatly reduced as rain or irrigation water is unable to penetrate past the compacted layers of soil to refill the subsoil. Cultivating compacted soils requires higher amounts of energy. 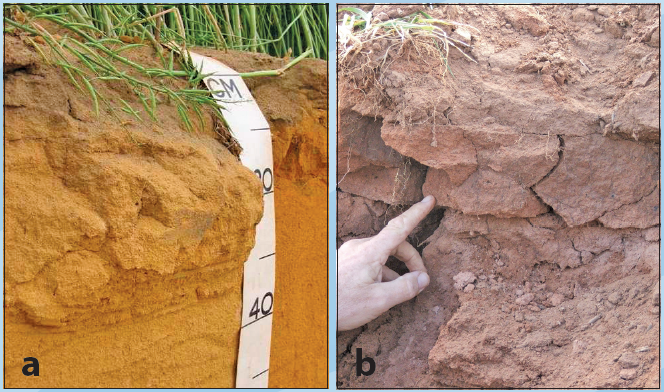 Hand probes are basically steel rods that are pushed into the soil by hand. Compacted layers can be detected because they are more difficult to push through than the soil above, and pushing also becomes easier once the rod is past the compacted zone. Testing with a hand probe needs to be done when the soil is wet to depth as many soils become hard when dry regardless of compaction status. Hand probes can be made from steel rod (about 8–10 mm diameter) or heavy gauge (3 mm) fencing wire about 40 cm long with one end looped to make a handle. Depth increments can be added.

A cone penetrometer (figure 2) works by the same principle as the hand probe except that it measures and records the force required to insert a standard sized cone into the soil profile. The penetrometer is inserted at a steady speed by hand and the instrument uses a gauge to measure the force (in mega-pascals (MPa) or kilopascals (KPa)) required to penetrate the soil at a given depth. The data are stored in a data logger and can then be downloaded and the strength of the soil profile assessed. 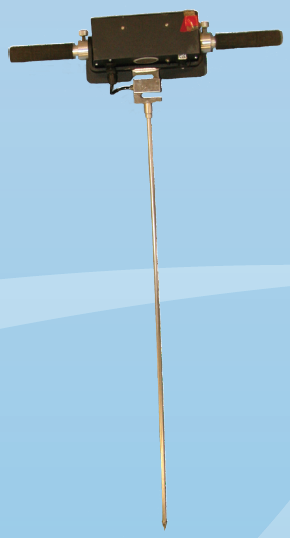 Ameliorating subsurface compaction can be difficult and costly. Therefore, it is best to minimise or prevent compaction as much as possible:

Where subsurface compaction is already a problem a number of options are also available to repair compacted areas. These may be biological, mechanical or a combination of both.

While clay soils are most susceptible to compaction, many have an in-built mechanism to repair structural degradation because they swell and shrink on wetting and drying, which breaks up compacted soil. Crop roots can be used to promote this cracking, as they dry the soil out and promote the formation of cracks. The best response is gained when crops are rotated, so as to give different rooting patterns. This ‘biological ripping’ is a risk-free form of repairing soil compaction.

Cultivation when the soil is dry can also be used to hasten the natural breakdown of clods. However, it is important to ensure that cultivation is shallow so that deeper (and usually wetter) soil is not compacted. Before starting, the soil moisture to at least cultivation depth should be checked to ensure the soil is dry and that it will fracture rather than smear. Deep ripping should only be used on compacted soils as a last resort, as ripping moist to wet soil can cause further smearing and compaction.

Pillai UP and McGarry D (1999) ‘Structure repair of a compacted Vertisol with wet-dry cycles and crops’, Soil Science Society of America Journal, 63: 201-210.