Take-all is a soil borne disease of cereal crops and is most severe on wheat crops throughout southern Australia. In Western Australia the disease is caused by two variations of the Gaeumannomyces graminis fungus; G. graminis var. tritici (Ggt) and G. graminis var. avenae (Gga) and is most severe in the high rainfall areas of the agricultural region (i.e. southern cropping regions and areas closer to the coast). Control of take-all is predominantly cultural and relies on practices which minimise carry-over of the disease from one cereal crop to the next.

Gaeumannomyces graminis survives the Australian summer in the residue of the previous season’s grass host (figure 1). The arrival of cooler temperatures and rainfall in the autumn encourages the fungus into action. The fungus infects the roots of the emerging crop during this period. 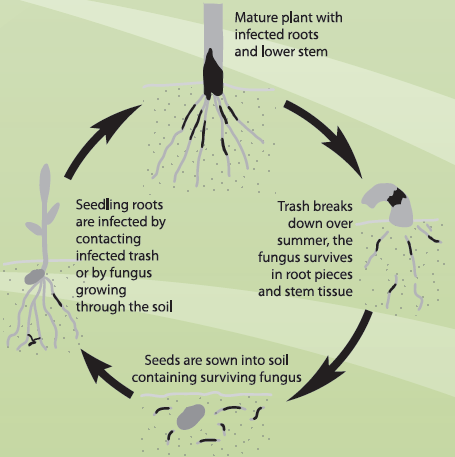 
Higher rainfall in winter is likely to increase take-all disease pressure. For this reason, the southern regions of Western Australia and those closer to the coast are most likely to suffer yield loss in cereal crops due to take-all (figure 2). While lower soil moisture will decrease the chance of a severe outbreak of take-all, plants that are already infected will find it difficult to cope due to water stress. 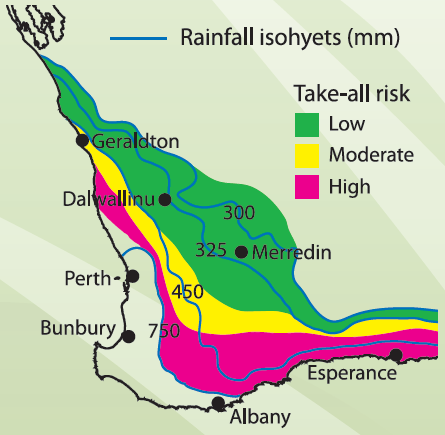 All annual grasses can be infected by G. graminis, although some species are more susceptible than others. While wheat, barley and triticale are the most susceptible crops to take-all, barley grass is also an effective host to the disease. Oats are the only cereal crop to offer resistance, although evidence of G. graminis strains capable of causing yield loss has been reported in areas where continual oat cropping occurs (Yeatman, 2003). Brome grass, silver grass and ryegrass are all viable host species for take-all. All non-cereal crops (e.g. lupins, canola and clover) are non-hosts to take-all.

Initial indications of take-all in a crop are the appearance of indistinct patches of poor growth in the crop; these may be a few metres across up to significant areas of crop. Closer inspection of individual plants will indicate discolouration of the crown, roots and stem base. Blackening of the centre of the roots (stele) is symptomatic of an early take-all infection. Severely infected plants will have a blackened crown and stem base and be easy to pull from the soil with no attached root system (figure 3). Any remaining roots are brittle and break off with a ‘square end’. 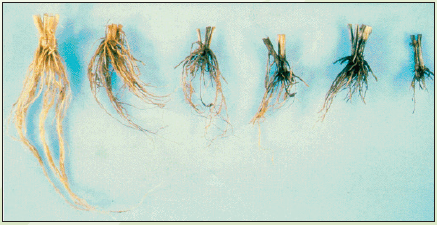 
The appearance of white-heads later in the season is another indicator of a take-all (although frost and micronutrient deficiencies can also cause white-heads), with severe infections causing the crop to hay-off early. Infected plants will produce pinched grain, with severe infections yielding little harvestable seed in the head (hence ‘take-all’) and in some cases infected areas may not be worth harvesting.

Currently, wheat and barley varieties resistant to take-all are not available. The most effective management strategy for take-all is to deny the fungus the ability to survive in the paddock, through the elimination of hosts. This is most effectively done through the use of a non-cereal break crop (lupin, canola, field peas etc.) and effective grass weed control during autumn. Pastures containing low levels of grass species will also have reduced take-all carryover the following season. Widespread adoption of minimum tillage has significantly increased the time required for residue to breakdown; therefore take-all management must reflect this. While burning does decrease the amount of surface residue infected with the fungus, it is generally not hot enough to affect the infected material below ground.

Fungicides, applied as either fertiliser or seed treatments, are registered but are generally only economically viable where severe outbreaks have occurred (Yeatman, 2003). In many cases it is more practical to sow non-cereal crops or pasture to reduce take-all carryover.

Competition from other soil organisms decreases the survival of G. graminis in the soil. Summer rains or an early break in the season allows for such conditions. The effect of this can be negated by poor weed control during this period. This has a double effect; 1) cereal weeds become infected, thus enabling G. graminis to survive until crop establishment, and, 2) rapid drying of the topsoil due to weeds decreases the survival of competitive soil organisms, therefore slowing G. graminis decline.

Take-all decline is the apparent waning of take-all incidence following many years of continuous cereal cropping, and has been show to occur in South Australia. This has been attributed to the build-up of antagonistic micro-organisms in the soil. Although this process may be possible, the economic losses incurred during the ‘build-up’ appear to be unacceptable (Anderson and Garlinge, 2000) and there have been few recorded examples of this type of decline in WA (Macleod et al., 2008). There have, however, been examples of a reduction in take-all incidence due to gradual acidification of soil; this decline is reversed when lime is applied to increase soil pH.