Ggt is the main cause of take-all, and its hosts include wheat, barley, Bevy rye and the grassy weeds, barley grass and broom grass. Gga hosts include all Ggt hosts plus oat. Both fungi survive over summer on roots and crowns of infected plants (figure 1). Gga and Ggt levels are reduced by significant summer rainfall, but high available nitrogen in soil over summer encourages inoculum survival.

Take-all can cause large yield losses, especially in wheat crops in seasons with above average winter/early spring rainfall followed by moisture stress around anthesis. The risk increases with consecutive above average rainfall seasons in intensive cereal and cereal/grass pasture rotations. Losses in barley are generally about 50% of those in wheat. Take-all is rarely a problem in highly acid soils (pH < 5.5 in water; pH < 4.7 in CaCl2). 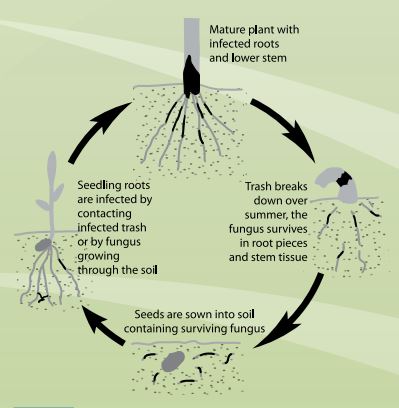 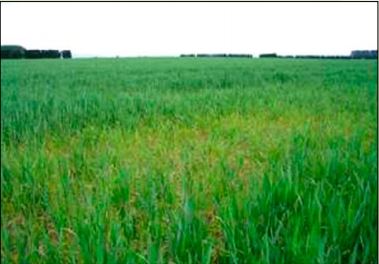 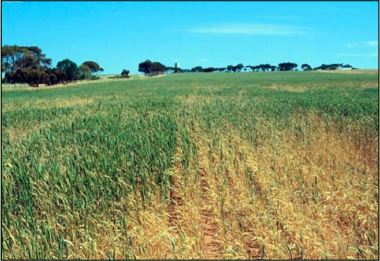 Figure 3: Take-all symptoms are most often observed as small to large patches of the crop haying off prematurely.


In the early stages of infection, the centre of the roots (stele) turns black. This is caused by the fungus spreading up the roots and blocking water and nutrient supply (figure 4). In wet seasons the blackening spreads along the seminal roots to the crown, and up the stem to produce ‘black socks’ symptoms (figure 5). Affected plants are also easy to pull from the soil due to the lack of a healthy root system. 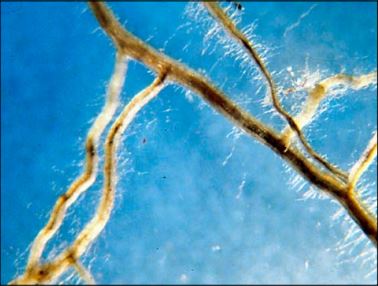 Figure 4: Blackening in the centre of the roots (stele) can be seen in take-all infected plants. (Photo: David Roget) 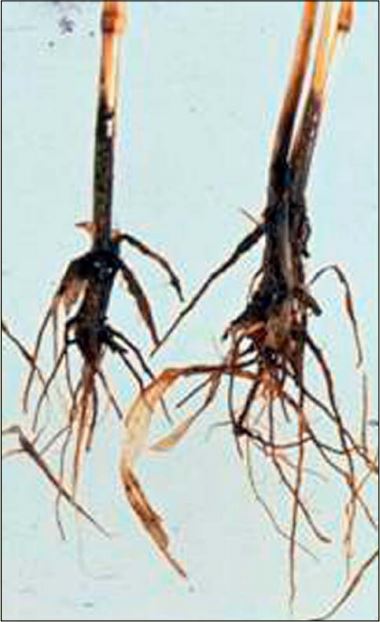 Take-all is usually controlled by a single grass-free break crop or pasture. Registered fungicides provide useful protection in low to medium disease risk paddocks. Control of ‘green bridges’ at least several weeks prior to seeding reduces the early multiplication of the fungus. Sowing between the rows of the last crop also reduces risk.

Disease suppression of take-all can occur in continuous cereal cropping systems, which has been attributed to the build-up of antagonistic microorganisms in the soil.

The PreDicta B soil test can measure Ggt and Gga prior to sowing and information can be used to help plan management programs.