Cereal Cyst Nematode (CCN, Heterodera avenae) is a pest of graminaceous crops worldwide. This nematode is a significant problem across eastern Australia, and is detected in the Northern and Central regions of Western Australia. CCN becomes more problematic in areas where intensive cereal cropping occurs. Cereal cyst nematode will only infect, feed and develop on cereals and other grasses (particularly wild oat). Non-cereal crops will not host the nematode, so are useful in rotations to limit damage caused to cereals.

The symptoms of CCN infection can be readily recognised. Above ground, patches of unthrifty yellowed and stunted plants can be observed (figure 1). Planting a susceptible crop in successive years will result in these patches becoming larger with time.

Closer examination of the roots will reveal symptoms that are typical of CCN. Below ground, wheat and barley roots will be ‘knotted’ (figure 2), and oat roots (figure 3) appear ‘ropey’ and swollen. Development of root systems is retarded and shallow. In spring, characteristic ‘white cysts’ (about the size of a pin head) can be seen with the naked eye if roots are carefully dug and washed free of soil (figure 4). These are the swollen bodies of the female CCN, each containing several hundred eggs. 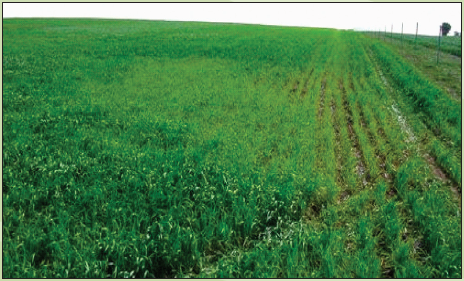 Figure 1: CCN will cause distinct patches of yellowed and stunted plants. Note the likeness of symptoms to poor nutrition or water stress. (Photo by Vivien Vanstone, DAFWA, Nematology) 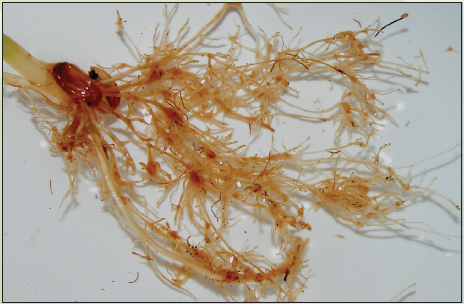 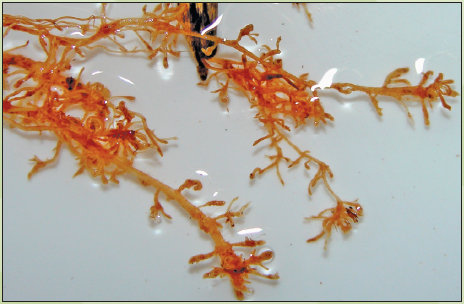 CCN juveniles hatch from eggs contained in the cysts remaining from previous seasons in response to lower temperatures and autumn rains. Hatching is delayed by late breaks or dry autumns and this increases the risk of crop damage. Once hatched the young nematodes seek out the roots of host plants. While the male nematodes remain free-living in the soil, the females penetrate roots and begin feeding. Following mating, the females produce eggs within their body. As the season progresses the females remain feeding at the same infection site and begin to swell into the characteristic white spheres. This process takes 6 – 9 weeks, and the CCN females remain like this until the host plant begins to senesce. The females die and their cuticle hardens and turns brown to form a cyst. Cysts are particularly hardy, and remain in the soil over summer until temperatures fall and the autumn rains begin which stimulates hatching of the next generation. Cereal cyst nematodes have only one life cycle per year. However, each cyst contains several hundred eggs, so populations can increase rapidly on susceptible cereals. 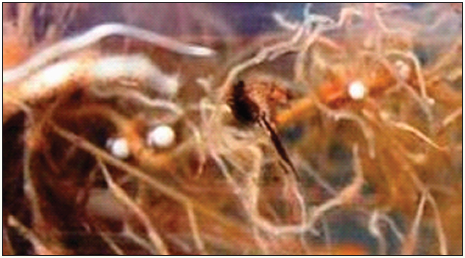 Figure 4: Wheat roots showing CCN infection. The white lemon shaped cysts are female CCN, and will turn brown over the course of the season. (Photo by Vivien Vanstone, DAFWA, Nematology)

As with other nematodes, there is no effective or economically feasible means of controlling CCN through chemical application. Chemical nematicides are expensive to use, toxic to humans and the success of applications are often highly variable. Cereal cyst nematode is best controlled through effective rotation management. Only 70 – 80 % of eggs hatch each season, regardless of the crop host. As a result, it can take several years for high CCN levels to be reduced by rotation with resistant or non-host crops. The use of a break crop (e.g. canola, lupins, chickpeas) ensures a large proportion of the CCN population is removed. In serious outbreaks of CCN, it may be important to avoid cereals for two years to ensure an adequate reduction in the population. Just two CCN eggs per of gram soil can cause significant economic loss to intolerant cereal crops. Levels of 1 – 5 eggs per gram of soil can reduce yield of wheat and oat by up to 20% (figure 5). 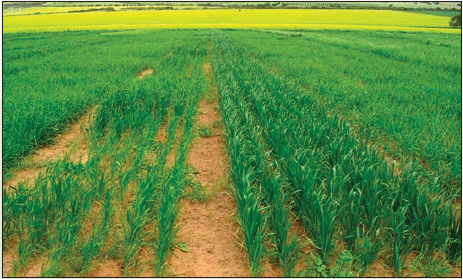 
Ryegrass, wild oats and other grass are also good hosts for CCN, although reproduction rates may be lower than on the cropping species. For this reason is important to realise that during a pasture phase in a rotation, the existence of cereal weeds will assist the development of a CCN population. Likewise, if there are grasses present following summer rains or around paddock borders it provides a carry over for the nematode population.

Ensuring optimum soil fertility is maintained helps to minimise the effects of CCN. Allowing the emerging crop access to adequate nutrition allows the root systems to establish and ‘get ahead’ of any potential nematode infections. Although this does not decrease the nematode population, losses associated with CCN infections will be minimised.

Finally, in paddocks where there is a known population of cereal cyst nematode and the planting of a cereal cannot be avoided it is important to choose cultivars displaying CCN resistance.