Rhizoctonia is a fungal disease affecting a wide range of crops and has become more prevalent throughout Western Australia in recent years, following the introduction of minimum tillage practices. The previous practice of tillage prior to seeding encouraged the breakdown of the fungus in the soil prior to emergence. Minimum tillage practices decrease the rate of organic matter breakdown, thereby providing a habitat for Rhizoctonia over summer.

The disease affects most major crops to varying degrees, with barley being most susceptible and oat crops least susceptible. Bare patch and root rot of cereals, and damping off and hypocotyl rot of oilseed and legumes are all caused by differing strains of Rhizoctonia solani.

Rhizoctonia survives best in organic matter just below the surface of an undisturbed soil. The fungus benefits from summer rainfall events by infecting and multiplying on weeds, and has a limited ability to survive on the residue of previous seasons crops.

The break of season initiates the development of the fungus in soil, thereby priming itself for infection of germinating seeds. Infection by the fungus is encouraged by factors that restrict root growth, such as low soil fertility and sulfonylurea herbicides. If there is a delay between the season break and seeding, it is imperative that weeds are controlled to minimise proliferation of the fungus. Good nitrogen nutrition helps to minimise the effects of the disease; bare patches are smaller and less severe.

In general, Rhizoctonia is most likely to be a severe problem where the plant is under stress from factors other than the disease, for example, low rainfall or poor nutrition.

The characteristic symptom of Rhizoctonia solani ZG-1 (also known as AG-8) in cereal crops is clearly defined bare patches (figure 1). The reason these patches are clearly defined relates to the susceptibility of young seedlings, and the placement of the fungus within the soil profile. Rhizoctonia tends to reside in the upper layers of soil but not in the surface and only infects seedlings through the root tip soon after germination.

Older plants have a more developed root epidermis that does not allow the penetration of hyphae into the root. For this reason, once the crop is fully established, plants have either perished due to seedling infection or are reasonably healthy. Some yield loss may be associated with plants on the margins of the bare patch.

Roots of a plant infected with Rhizoctonia will typically be shortened with a brown ‘spear tip’ where they have rotted (figure 2). Plants within a patch remain stunted with stiff, rolled leaves and can be darker green than those outside the patch (Macleod et al., 2008). 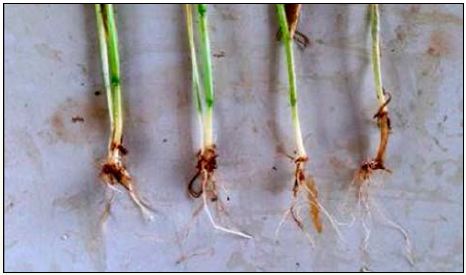 
Damping off and hypocotyl rot (oilseeds)

These symptoms are caused by Rhizoctonia solani ZG5 and ZG1-1, which are particularly infectious on canola (Barbetti and Khangura, 2005). As with cereals, damping off and hypocotyl rot are expressed as bare patches in the emerging crop. Closer inspection of seedlings show a brown discolouration of the hypocotyl and/or ‘spear tips’.


There are certain soil conditions that favour Rhizoctonia development during and after seeding.

The disease is most common in soils of poor fertility (Department of Agriculture and Food, Western Australia). Crops with access to sufficient nutrients for growth have a better ability to ‘get ahead’ of Rhizoctonia infections.

Rhizoctonia is sensitive to cultivation, with cultivation after rain and before sowing most effective at reducing infection. Disturbing the soil does not allow the fungus to ‘prime’ itself for infection of the emerging crop.

Under moisture stress the crop becomes more susceptible to Rhizoctonia infection and has a decreased ability to ‘get ahead’ of the disease.

Sulfonylurea herbicides can sometimes worsen Rhizoctonia, and this is attributed to minor herbicidal effects on the crop.

Where reduced tillage is practiced, Rhizoctonia bare patch is best controlled through effective management of weeds and maintaining adequate nutrition for the establishing crop. Spraying weeds with a fast acting knock down herbicide will minimise the development of the fungus in the ground prior to seeding, and good nutrition gives the crop a better chance of ‘getting ahead’ of the disease. Best tillage practices involve deep cultivation and shallow sowing, with minimal time between each event.

In the past, tillage was the most effective method of reducing the impact of Rhizoctonia. The establishment of Rhizoctonia in the topsoil late in autumn was negated as cultivation broke the network of fungal hyphae. The fungus did not have time to recover before seedling establishment. In severely infected paddocks, cultivation may be an important management strategy.

Crops resistant to Rhizoctonia are not available, however recent research suggests fungicidal treatments (in-furrow liquid or treated fertiliser) at seeding can reduce infection.

In areas where the disease is known or suspected it is best practice to clean knife points once the seeding is complete, thereby eliminating movement of the fungus from one paddock to the next.

In general, maintaining adequate nutrition (especially nitrogen) during crop establishment is the best way to reduce the chance of Rhizoctonia infection.